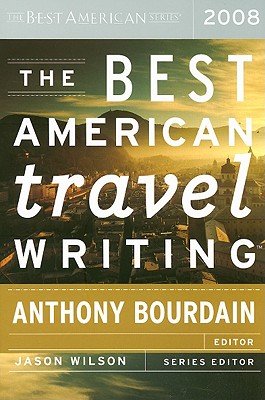 In his introduction to The Best American Travel Writing 2008, editor Anthony Bourdain writes that the pieces that “spoke the loudest and most powerfully to me were usually evocative of the darker side, those moments fearful, sublime, and absurd; the small epiphanies familiar to the full-time traveler, interspersed by a sense of dislocation—and the strange, unholy need to record the experience.” With this in mind, Bourdain and series editor Jason Wilson have assembled a wide-ranging and wonderfully eclectic collection that delves headlong into those darker moments and subtle realizations, looking to absorb, provoke, and offer a moving record of what it means to travel in the twenty-first century.

Here you will find Seth Stevenson’s extraordinary experience of “Looking for Mammon in the Muslim World” as he makes his way through sweltering and paradoxical Dubai. Exotic tastes and larger-than-life personalities abound as Bill Buford accompanies the chocolate maker Frederick Schilling to the rain forests of Brazil. And on the other side of the world, Calvin Trillin trolls Singapore for the ultimate street food, while Kristin Ohlson delves into the harrowing challenges faced by proprietors of restaurants in Kabul, Afghanistan.

The twenty-five pieces in this collection have their fair share of the absurd as well. David Sedaris explains the hilarious highs (sundaes) and woeful lows (sobbing with your seatmate) of flying Business Elite. Gary Shteyngart goes “To Russia for Love” during St. Petersburg’s vodka-soaked wedding season. And Emily Maloney gets up close and personal with her fellow travelers — and their massage devices — in a South American hostel.

Culled from an amazing variety of publications, “the writing in this volume is so vibrantly good, you’ll feel like you’ve armchair-traveled around the world” (Chicago Sun Times).