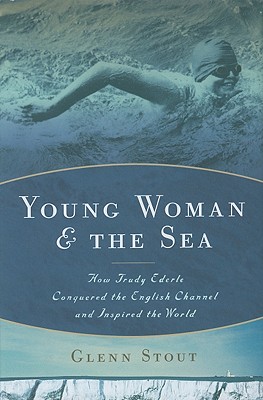 Young Woman and the Sea

How Trudy Ederle Conquered the English Channel and Inspired the World

In 1926, before skirt lengths inched above the knee and before anyone was ready to accept that a woman could test herself physically, a plucky American teenager named Trudy Ederle captured the imagination of the world when she became the first woman to swim the English Channel. It was, and still is, a feat more incredible and uncommon than scaling Mount Everest. Upon her return to the United States, "Trudy of America" became the most famous woman in the world. And just as quickly, she disappeared from the public eye.  Set against the backdrop of the roaring 1920s, Young Woman and the Sea is the dramatic and inspiring story of Ederle’s pursuit of a goal no one believed possible, and the price she paid. The moment Trudy set foot on land, triumphant, she had shattered centuries of stereotypes and opened doors for generations of women to come. A truly magnetic and often misunderstood character whose story is largely forgotten, Trudy Ederle comes alive in these pages through Glenn Stout’s exhaustive new research.

Praise For Young Woman and the Sea: How Trudy Ederle Conquered the English Channel and Inspired the World…

"Young Woman and the Sea is the story of Gertrude Ederle’s epic swim across the English Channel interwoven with a sweeping and glimmering history of swimming.  These were the good old days when open water swimmers were sex symbols, pioneers of the sport, and leaders of social change.  For anyone who loves the water, or has a big dream – this is the book to read!" —Lynne Cox, author of Swimming to Antarctica and Grayson "Too often, looking at America through its sports, and vice versa, results in a distorted view of both of them. In Glenn Stout's account of Trudy Ederle and the English Channel, we have a clear and honest mirror. Young Woman and the Sea is a first-rate piece of social history, and a tale told, well, swimmingly." —Charles P. Pierce, author of Idiot America and Moving the Chains