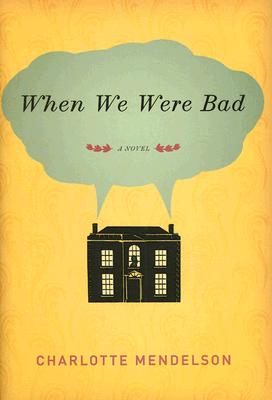 When We Were Bad (Hardcover)

Critics in Britain are already raving about Charlotte Mendelson’s excoriatingly funny yet deeply humane novel about a glamorous London family that happens to be falling apart.

The Rubins are the perfect family. They’re wonderfully happy and very glamorous. The mother, Claudia, is the ultimate Jewish matriarch: a powerful rabbi known for her charm, brains, and determination. Now this dynastic Jewish family is getting ready to marry off the perfect eldest son. History, community, and even gastronomy unite the guests lucky enough to attend this joyous occasion.

But when the groom -- one minute before exchanging vows -- bolts with the wrong woman, the myths that have defined this family take on darker overtones. Mendelson’s astonishing eye for detail, as well as her just-right balance of plot and character, makes the unfolding of this story an uncommon treat. In a marvelously compressed style that also bursts with life, she reveals how all four adult Rubin children, and their parents, struggle with huge secrets, sexual frustration and sexual experimentation, and many betrayals.

Charlotte Mendelson opens a window on a realm rarely explored in British society: the complicated world of English Jewry. But to watch this seemingly blessed family drastically, disastrously fall apart before regaining balance is to understand that their struggles -- like all of ours -- are universal ones.

Charlotte Mendelson works as a book editor for a British publisher. She is the author of the novels Daughters of Jerusalem and Love in Idleness. Mendelson has received the prestigious Somerset Maugham Award and the John Llewellyn Rhys Prize, among other honors. Visit her website at www.charlottemendelson.com.

Praise For When We Were Bad…

"When We Were Bad is a bloody good read." - Sarah Gold in Notes from the Bookroom, PublishersWeekly.com

"[Mendelson] is a keen observer … she deftly blends humor and pathos in this portrayal of a family in crisis."

"A witty assassination of North London Jewish matriarchy by an award-winning British novelist [with] a wicked but merciful intelligence." Kirkus Reviews

"A funny, smart, and delightfully ambivalent novel about surviving the people who love us most." - Montreal Gazette

"Like the best fiction, it is universal ... American readers will undoubtedly recognize their own familial and communal lives." - The Forward

"Quite superlative." - The Scotsman

"As intelligent as it is funny … brilliant." Observer

"A dazzling portrait of a family in crisis ... watchful, alert to details and insightful." Guardian

"So pleasurable …a consummate novelistic accomplishment." - The London Times

“This is a novel to devour in one fell swoop.” - Fay Weldon

"Assured, inventive and entertaining … brilliantly climactic … will have a universal appeal." Sunday Telegraph