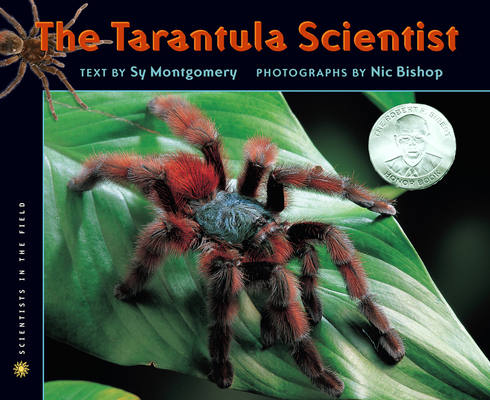 The Tarantula Scientist (Scientists in the Field)

Sam Marshall loved animals but disliked school. Then, on his first college research project, he set out to study tarantulas, and everything changed.

Now Sam’s a spider scientist extraordinaire, exploring the dense rainforest of French Guiana, knocking on the doors of tarantula burrows, and trying to get a closer look at these incredible creatures.

Yellow blood, silk of steel, and skeletons on the outside are just a few of the remarkable attributes tarantulas boast.

Join Sam as he visits the largest comparative spider laboratory in America where close to five hundred of these fascinating creatures live, dazzling and astounding the scientists who study them.


Praise For The Tarantula Scientist (Scientists in the Field)…

"Montgomery has a gift for scene-setting... She deftly weaves clear explanations and comparisons into the main text... Bishop's phenomenal photos show spiders mating, shedding their skin, even leaping through the air. It's enough to make Miss Muffet fall in love." Kirkus Reviews, Starred

"...this is a vivid look at an enthusiastic scientist energetically and happily at work, both in the field and in the lab, questioning, examining, testing, and making connections. A treat, even for arachnophobes." School Library Journal, Starred

"Bishop's photographs rise magnificently to the challenge of capturing earth-toned spiders amid earth-toned jungle surroundings, bringing the critters up-close and personal and offering a few of his trademark astonishing stop-action shots... This would liven up a science curriculum no end, and it might also convince young readers to go beyond the elemental pleasures of 'Ew, gross' to the more sophisticated appreciation of 'Wow, cool.'" The Bulletin of the Center for Children's Books, Starred

This beautifully photographed book explains just about everything an elementary school student might want to know about this often misunderstood and maligned creature.
The Five Owls, Starred —