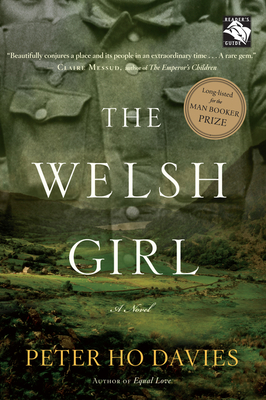 Long-listed for the Man Booker Prize, award-winning author Peter Ho Davies's The Welsh Girl is "a beautiful, ambitious novel that takes the reader into the most personal corner of war" (New York Times bestselling author Ann Patchett), set in the stunning landscape of North Wales just after D-Day.

When a POW camp is established near her village, seventeen-year-old barmaid Esther Evans finds herself strangely drawn to the camp and its forlorn captives. She is exploring the camp boundary when the astonishing occurs: Karsten, a young German corporal, calls out to her from behind the fence. From that moment on, the two foster a secret relationship that will ultimately put them both at risk. Meanwhile, another foreigner, the German-Jewish interrogator Rotherham, travels to Wales to investigate Britain's most notorious Nazi prisoner, Rudolf Hess.

In this richly drawn and thought-provoking work, all will come to question where they belong and where their loyalties lie.

"This is a deeply felt, deeply imagined novel, and its characters remain a presence after the book is closed." --Stuart Dybek

"Deeply compelling and utterly uncompromising . . . each sentence is a pleasure. This book is a rare gem." --Claire Messud

"What makes this first novel by an award-winning short-storyteller an intriguing read [is] the beautifully realized characters." Publishers Weekly

"The characters are heartfelt and real and events vividly and memorably described." Library Journal Starred

"A rich, moving explication of the ambiguities of duty and sacrifice, courage and perseverance." Kirkus Reviews

"This first novel by Davies . . . has been anticipated - and, with its wonderfully drawn characters, it has been worth the wait." Booklist, ALA, Starred Review

"An ambitious, layered meditation on what it means to be from a particular place...eloquent...Davies's achievement is significant." --Jennifer Egan The New York Times Book Review