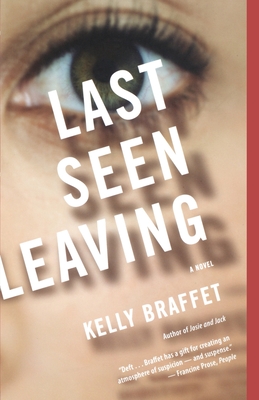 As she did in her darkly thrilling debut, Josie and Jack, Kelly Braffet again explores the often ambiguous nature of love and danger in a riveting novel of suspense. When twenty-something drifter Miranda Cassidy wrecks her car one night on the way home from a bar, she seizes the accident as an opportunity to reinvent her life. Hitching a ride with a mysterious stranger, she finds quick work and a fresh start hundreds of miles away in an oceanside vacation town. She doesn’t look back, figuring no one is going to miss her. But when her mother finds no forwarding address, she senses something terrible has happened. The memory of the tragic disappearance of Miranda’s father years before and the force of long-buried emotions drive her on a frantic quest to find her daughter, no matter what the cost.

Kelly Braffet's first novel, Josie and Jack, was published in 2005. It was praised as “wicked fun . . . a gothic tour of hell” (Los Angeles Times) and “a compelling study of love, hate, and psychopathic jealousy” (New York Post). Braffet was born in Long Beach, California, in 1976, and has lived in Arizona, rural Pennsylvania and Oxford, England. She is a graduate of Sarah Lawrence College and Columbia University, and has taught novel writing at the Sackett Street Writing Workshop. She lives in Brooklyn, New York, with her husband, the writer Owen King.

“Deft . . . Braffet has a gift for creating an atmosphere of suspicion—and suspense.”—Francine Prose People Magazine

“Brainy, quirky, and bold, this is anything but your grandma’s cozy mystery novel.” Elle

"Dno't read [it] before bed, or else you'll never fall asleep." -- Jane Magazine