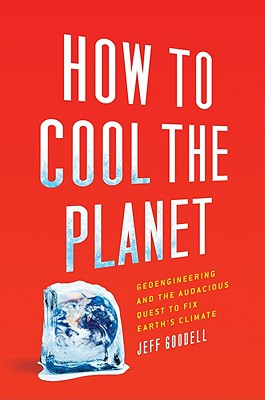 How to Cool the Planet

Geoengineering and the Audacious Quest to Fix Earth's Climate

Right now, a group of scientists is working on ways to minimize the catastrophic impact of global warming. But they're not designing hybrids or fuel cells or wind turbines. They're trying to lower the temperature of the entire planet. And they're doing it with huge contraptions that suck CO2 from the air, machines that brighten clouds and deflect sunlight away from the earth, even artificial volcanoes that spray heat-reflecting particles into the atmosphere.
This is the radical and controversial world of geoengineering, which only five years ago was considered to be "fringe." But as Jeff Goodell points out, the economic crisis, combined with global political realities, is making these ideas look sane, even inspired.
Goodell himself started out as a skeptic, concerned about tinkering with the planet's thermostat. We can't even predict next week's weather, so how are we going to change the temperature of whole regions? What if a wealthy entrepreneur shoots particles into the stratosphere on his own? Who gets blamed if something goes terribly wrong? And perhaps most disturbing, what about wars waged with climate control as the primary weapon? There are certainly risks, but Goodell believes the alternatives could be worse. In the end, he persuades us that geoengineering may just be our last best hope--a Plan B for the environment. His compelling tale of scientific hubris and technical daring is sure to jump-start the next big debate about the future of life on earth.


Praise For How to Cool the Planet: Geoengineering and the Audacious Quest to Fix Earth's Climate…

"[Goodell's] provocative account achieves a fine balance between the inventor's enthusiasm and the scientist's skepticism." —Publishers Weekly"Goodell follows Big Coal (2006) with a lively and invaluable introduction to the simultaneously alarming and promising field of geoengineering… Hopefully his incisive and entertaining overview will help shape the debate." — Booklist (starred review) "How to Cool the Planet is thoughtful, informative, and darkly entertaining. It’s the best treatment of this important (and scary) topic you can find." — Elizabeth Kolbert, author of Field Notes from a Catastrophe"In the highly contentious climate debate geoengineering remains one of the most controversial, yet intriguing, remaining questions. In this vividly written, thoughtful book, Jeff Goodell helps readers explore the audacious question of whether humans can use technology to fix the very problem it's created." — Juliet Eilperin, national environmental reporter, Washington Post

"This could be the most important book written about the climate. Goodell compellingly describes the characters, ideas and motivations of a small band of geoengineers, scientists who would manipulate the very substance of our planet to alleviate global heating. As one of them, I know that what he writes is true, and I share his fear that geoengineering may put us on a path yet more deadly than the one we took to end war by inventing nuclear weapons. Yet if climate change becomes unbearable, we may be driven to geoengineering as a last resort. Read this unforgettable book; once started, you will not be able to put it down." — James Lovelock, author of Gaia and The Vanishing Face of Gaia