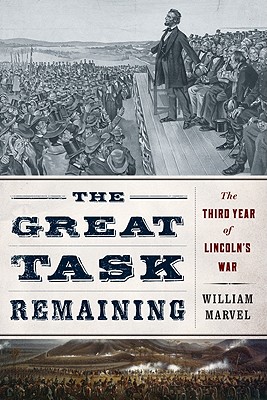 The Third Year of Lincoln's War

The Great Task Remaining is a striking, often poignant portrait of people balancing their own values—rather than ours—to determine whether the horrors attending Mr. Lincoln’s war were worth bearing in order to achieve his ultimate goals.

As 1863 unfolds, we see the disaster at Chancellorsville, the battle of Gettysburg, and the end of the siege of Vicksburg. Then, astonishingly, the Confederacy springs vigorously back to life after the Union triumphs of the summer, setting the stage for Lincoln’s now famous speech on the Pennsylvania battlefield. Without abandoning the underlying sympathy for Lincoln, Marvel makes a convincing argument for the Gettysburg Address as being less of a paean to liberty than an appeal to stay the course in the face of rampant antiwar sentiment.

The Great Task Remaining offers a provocative history of a dramatic year—a year that saw victory and defeat, doubt and riot—as well as a compelling story of a people who clung to the promise of a much-longed-for end.

WILLIAM MARVEL’s many acclaimed books on the Civil War include The Great Task Remaining, Lincoln's Darkest Year, Mr. Lincoln Goes to War, and Andersonville. He has won a Lincoln Prize, the Douglas Southall Freeman Award, and the Bell Award.