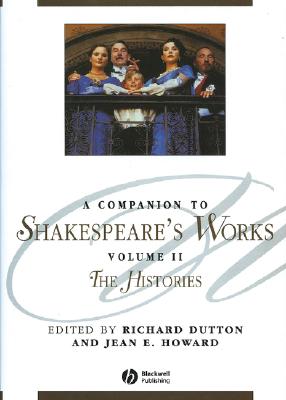 A Companion to Shakespeare's Works (Hardcover)

This four-volume Companion to Shakespeare's Works, compiled as a single entity, offers a uniquely comprehensive snapshot of current Shakespeare criticism.

Jean E. Howard is William E. Ransford Professor of English at Columbia University and a past president of the Shakespeare Association of America. She is an editor of The Norton Shakespeare, and author of, among other works The Stage and Social Struggle in Early Modern England (1994) and, with Phyllis Rackin, of Engendering a Nation: A Feminist Account of Shakespeare's English Histories (1997). Richard Dutton is currently Professor of English at Lancaster University, author of Mastering the Revels: the Regulation and Censorship of Renaissance Drama (1991) and Licensing, Censorship and Authorship in Early Modern England: Buggeswords (2000). He is editor of the Palgrave Literary Lives series. From 2003, he will be Professor of English at Ohio State University.
or
Not Currently Available for Direct Purchase
Copyright © 2020 American Booksellers Association