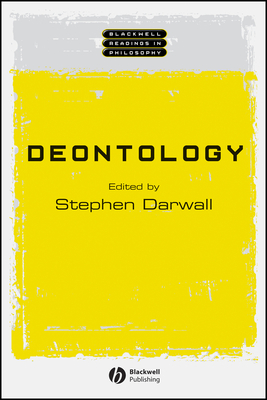 Deontology brings together some of the most significant philosophical work on ethics, presenting canonical essays on core questions in moral philosophy. Edited and introduced by Stephen Darwall, these readings are essential for anyone interested in normative theory.

Stephen Darwall is the John Dewey Collegiate Professor of Philosophy at the University of Michigan. He has written widely on moral philosophy and its history, and is the author of Impartial Reason (1983), The British Moralists and the Internal 'Ought' 1640-1740 (1995), Philosophical Ethics (1998), and Welfare and Rational Care (2002). He is the editor, with Allan Gibbard and Peter Railton, of Moral Discourse and Practice (1997).
Loading...
or support indie stores by buying on