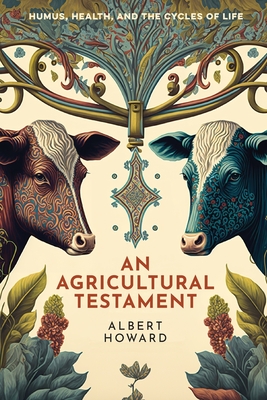 Why is there a cow on the front cover of this book? This is a book about agriculture, and farm animals have become unfashionable in some quarters. Cows, it turns out, are responsible for global warming, climate change, and so, no doubt, rising sea levels and chemtrails.

But any real farmer, from any time in history, knows that this is not true. Animals have been around forever. Animals are a vital part of an insanely complex living system. Anyone who knows the basics of regenerative agriculture understands this.

Albert Howard spent years studying and using the methods of traditional Asian agriculture, and shows in this book that the fertility and health of the soil depend on humus, in the production of which animal materials play an vital role. A healthy soil needs animal inputs. Animals in agriculture are central; they're right in there with fungi.

This message is not welcomed by those who would feed the modern world a diet of plant-based, lab-grown food substitutes that have lists of ingredients as long as your arm, and are going to save the planet using gene-spliced soybeans and 3D printed pizzas.

So, the cow and her calf are on the cover to redress the balance, and also to feature as one of the stars of this book (along with sugar cane, waste pits, and public servants). She was the photogenic one.

Albert Howard's text has been thoroughly re-edited in this new version of his book. The habit, common at the time, of using long paragraphs is not preferred by modern readers, so the text has been extensively 'reparagraphed'. Grammar has been tweaked, and styles have been adopted. Headings have been added, infinitives unsplit.

The changes made have been to make things more comfortable for modern eyes and tastes. The sense and intention of the author has not been altered at all, of course. We hope that Albert Howard would approve of this reworking of his book. His ideas are more important than ever.

"Howard's discoveries and methods, and their implications, are given in detail in An Agricultural Testament. They are of enormous usefulness to gardeners and farmers, and to anyone who may be interested in the history and the problems of land use. But aside from its practical worth, Howard's book is valuable for his ability to place his facts and insights within the perspective of history. This book is a critique of civilisations, judging them not by their artefacts and victories, but by their response to the sacred duty of handing over to the next generation, unimpaired, the heritage of a fertile soil."