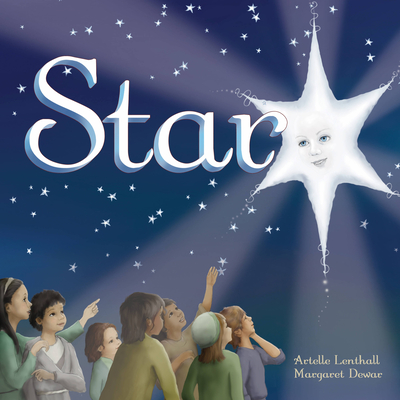 Sometimes the future is brighter than we could ever imagine.

Like all of Star’s friends, it is a source of delight and beauty, but most importantly although Star doesn’t fully realise it; a guide. Unlike Star’s friends it’s small, doesn’t twinkle and is never gazed upon by anyone. How is Star supposed to accomplish its dream, while being so dismal? Helped and comforted by one of the angels, Star learns self-belief, patience and trust. Star is brave, hopeful and resilient and comes out every night over the little town even after years of never being noticed.

One special night Star sees a young woman, sitting, huddled on a donkey, shivering against the bitter cold. Star is so moved with compassion and love for this young woman that its own problems are forgotten. Star’s dream comes true that week and achieving it is easy, at first. Star guides the woman to safety and many, many people to her special family.

Star’s dream comes at a great cost, but Star earns both the gratitude of the special family and a place in hearts of all in the heavens, in the little town and beyond.

Star is the story of The Nativity told from the rather unusual perspective of The Christmas Star. Like all Nativity based stories it’s a story of Love, Wonder and Sacrifice. There are also themes of friendship, self-doubt and finding one’s place in the world/ finding and sharing one’s gifts and talents.

Artelle Lenthall loves the world of stories, the magic of words on a page and the amazing places they can take us. As a primary school teacher and mother it is not surprising Artelle developed a particular love of Picture Books and their profound ability to build relationships and impact upon the lives of children and adults alike. As a children’s writer, particularly of Picture Books, Artelle hopes to share stories children and adults alike will love to hear, read and lose themselves in.

Margaret Dewar has been working as a full time freelance artist for many years using pen, pencil, digital and mixed media. In her business “JS Illustrators” Margaret has worked in real estate advertising, but has a great love for all sketching, cartooning and going anywhere her imagination takes her. The computer also plays an important part in Margaret’s work. Margaret grew up in Melbourne and now lives in Mount Evelyn with her husband. She studied Commercial Art at Swinburne Technical College and later on became established by illustrating houses. Margaret has now branched out into many types of book illustration, as well. One book Margaret illustrated was Concierge Confidential by Harry Nicolaides. Margaret’s work has also been used in Religious Education magazines, and at one stage Margaret had an art stand in Melbourne Central on Sundays, creating portraits and cartoons.