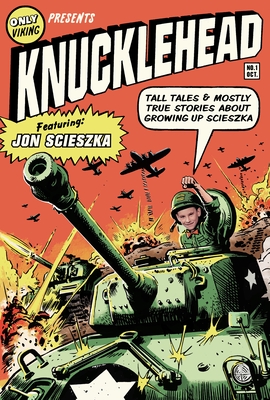 Tall Tales and Almost True Stories of Growing up Scieszka

How did Jon Scieszka get so funny, anyway? Growing up as one of six brothers was a good start, but that was just the beginning. Throw in Catholic school, lots of comic books, lazy summers at the lake with time to kill, babysitting misadventures, TV shows, jokes told at family dinner, and the result is Knucklehead. Part memoir, part scrapbook, this hilarious trip down memory lane provides a unique glimpse into the formation of a creative mind and a free spirit.

Multiple award-winning author Jon Scieszka grew up in Flint, Michigan, the second oldest and the nicest of six boys. Jon went to school at Culver Military Academy in Indiana where he was a Lieutenant; Albion College in Michigan where he studied to be a doctor; and Columbia University in New York, where he received an M.F.A. in fiction. He taught elementary school in New York for ten years in a variety of positions. He is the author of many books for children including the New York Times Best Illustrated Book The Stinky Cheese Man and Other Fairly Stupid Tales (illustrated by Lane Smith), the Caldecott Honor book The True Story of the Three Little Pigs (illustrated by Lane Smith), and Math Curse (illustrated by Lane Smith).  In addition to his work as an author, Jon also runs a web-based literacy program called “Guys Read” that is designed to encourage boys, particularly reluctant readers, to get involved with books. In 2008, Jon was named the country’s first National Ambassador for Young People’s Literature, a joint effort of the Library of Congress and the Children’s Book Council. During his two-year role as Ambassador, he acted as a spokesperson for children’s literature, speaking to groups of parents, teachers, and children to encourage the importance of reading. You can visit Jon online at www.jsworldwide.com.

Praise For Knucklehead: Tall Tales and Almost True Stories of Growing up Scieszka…

"Just try to keep kids away from this collection. Inspired book design makes the volume look like an old-school comic. The front cover features an elementary-aged Scieszka popping up out of a military tank, surrounded by explosions and bombers, while the back advertises a "Treasure Chest of Fun" and displays chapter titles and excerpts along with nostalgic graphics. Scieszka answers the oft-asked question, "Where do you get your ideas?" with a slew of childhood anecdotes and his family's escapades that have given him plenty of material from which to draw. Born in 1954, the second of six brothers, he writes about Catholic and military schools, buying gifts, chores, and hand-me-downs-all familiar experiences related with a specific Scieszka twist. His mother, a nurse, insisted that her sons use proper terms for anatomy ("rectum" rather than "butt") and bodily functions ("urinate" rather than "pee"), making way for several laugh-out-loud moments. Some stories are just amiably funny, such as wearing recycled Halloween costumes, while others help readers understand more about how the author developed his unique sense of humor. Although it includes the car trip story from Guys Write for Guys Read (Viking, 2005), Knucklehead is aimed at a younger audience. Family photographs and other period illustrations appear throughout. Entertaining and fast-moving, silly and sweet, this homage to family life is not to be missed."–School Library Journal

"Offering an answer to the perennial query about where his ideas come from, the National Ambassador for Young People's Literature looks back to his early 1960s youth. Fans will not be surprised to learn that, except for his mother (a nurse, fortunately) he grew up in an all-male household: father, five brothers and "even our dogs and cats and fish." The resulting memories include group pukes in the back seat, slipping toy soldiers into the Christmas creche, playing neighborhood games like "Slaughterball" and idyllic summer expeditions into the woods around his grandparents' cottage-not to mention the pleasures of random dips into the household children's encyclopedia and spurning "those weirdos Dick and Jane" to "find out more about real things like dogs in cars and cats in hats." Illustrated with truly dorky school-yearbook photos and family snapshots, this account of a thoroughly normal childhood doesn't match Gary Paulsen's memoirs for hilarity or Tomie DePaola's for cultural insight, but it will draw chuckles of amusement from middle-graders (particularly less eager readers) and of recognition from their parents and grandparents."–Kirkus Reviews

"In this arch, glib, unapologetically shame-free outing, Scieszka, who grew up as the second of six sons, has written an autobiography about boys, for boys and anyone else interested in baseball, fire, and peeing on stuff. The format of the book is perfectly suited to both casual and reluctant readers. The text is arranged into two- to three-page nonsequential chapters and peppered with scrapbook snapshots and comic-book-ad reproductions. The accessibly irreverent language pushes the boundaries of moderation even as it reflects a sort of skewed wholesomeness. But the real testosterone payoff here is in the stories, which range from losing battles with fractious parochial-school nuns to turns “watching” little brothers (wherein the author watched brother number six eat a cigarette butt and charged neighborhood kids to watch him do it again). By themselves, the chapters entertain with abrupt, vulgar fun. Taken together, they offer a look at the makings of one very funny author—and a happy answer to the dreaded autobiography book report."–Booklist Reviews