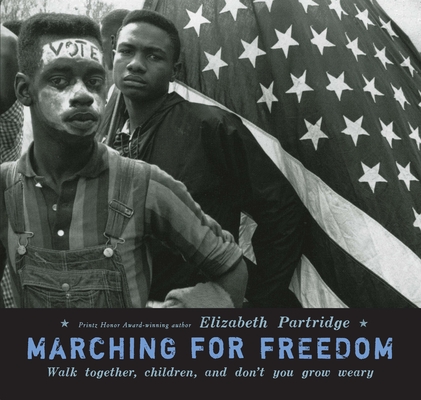 Walk Together Children and Don't You Grow Weary

An inspiring look at the fight for the vote, by an award-winning author

Only 44 years ago in the U.S., Dr. Martin Luther King Jr. was leading a fight to win blacks the right to vote. Ground zero for the movement became Selma, Alabama.

Award-winning author Elizabeth Partridge leads you straight into the chaotic, passionate, and deadly three months of protests that culminated in the landmark march from Selma to Montgomery in 1965. Focusing on the courageous children who faced terrifying violence in order to march alongside King, this is an inspiring look at their fight for the vote. Stunningly emotional black-and-white photos accompany the text.

Praise For Marching for Freedom: Walk Together Children and Don't You Grow Weary…

★ “Gripping profiles of young people who made a difference.” Booklist, starred review

★ “A dramatic and a memorable statement.” VOYA, starred review

Elizabeth Partridge (www.elizabethpartridge.com) is a National Book Award finalist and author of several nonfiction books for children, including Restless Spirit: The Life and Work of Dorothea Lange; This Land Was Made for You and Me: The Life and Songs of Woody Guthrie; and the Printz Honor–winning John Lennon: All I Want Is the Truth. She lives in the San Francisco Bay area.
Loading...
or support indie stores by buying on