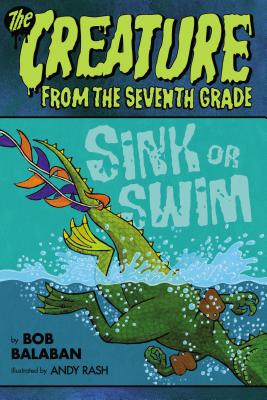 There's a thief in town, and all signs point to twelve-year-old Charlie Drinkwater. Once you spontaneously morph into a giant mutant dinosaur in the middle of the school day, people will suspect you of just about anything. Charlie's teachers decide that all he needs is a little discipline, so they make him join the swim team. The only problem is, Charlie is terrified of the water. (He's terrified of a lot of things.) Charlie and his friends vow to apprehend the real criminal and clear Charlie's name. But when they discover who the actual thief is, Charlie's problems get a whole lot bigger . . . not to mention slimier, scalier, and smellier!


Praise For Sink or Swim…

"A masterful mix of humor, mystery, and school-related problems. . . . Charlie is a likable and believable character who will appeal to reluctant readers."
-School Library Journal

"Bob Balaban knows this world so well...you might think this actually happened to him...read it and you’ll see!"
-Whoopi Goldberg

“A very funny and insightful exploration of what it means to be the REAL you.”
-Julianne Moore

"The amiable drollery of The Creature From the Seventh Grade carries it a long way."
-The New York Times

Bob Balaban is the author of the McGrowl series and the Creature from the Seventh Grade series. He has appeared in nearly one hundred movies, including "Midnight Cowboy," "Close Encounters of the Third Kind," "Waiting for Guffman," and "Moonrise Kingdom." He has been nominated for an Oscar, a Tony, four Emmys, a Producers Guild Award, two Directors Guild Awards, and two Screen Actors Guild Awards, one of which he won for his appearance in "Gosford Park," a film he also produced. A Chicago native, Bob now lives in Bridgehampton, NY.
Loading...
or
Not Currently Available for Direct Purchase