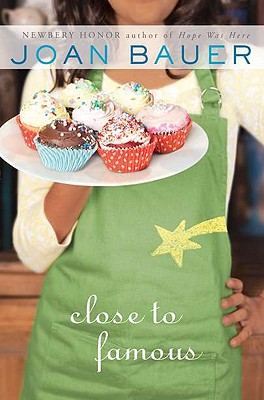 “Joan Bauer once again brings us a strong young female character. Foster McFee must learn to deal with life - from her mother's abusive boyfriend, to her inability to read, to figuring out just how to survive. What Foster does know is how to make cupcakes. Somehow, with much laughter and tears and inspiration from watching a TV cooking show, baking helps Foster to make friends, dream, and begin to do a lot more than simply survive. She learns to make the best cupcakes -- and the best life -- out of the craziest ingredients!”
— Joanne Bibeau, Storybook Cove, Hanover, MA
View the List

Foster McFee dreams of having her own cooking show like her idol, celebrity chef Sonny Kroll. Macon Dillard's goal is to be a documentary filmmaker. Foster's mother Rayka longs to be a headliner instead of a back-up singer. And Miss Charleena plans a triumphant return to Hollywood. Everyone has a dream, but nobody is even close to famous in the little town of Culpepper. Until some unexpected events shake the town and its inhabitants-and put their big ambitions to the test. Full of humor, unforgettable characters, surprises, and lots and lots of heart, this is Joan Bauer at her most engaging.

Joan Bauer is the author of nine previous novels for young readers, among them the Newbery Honor Book, Hope Was Here, and the Los Angeles Times Prize winner, Rules of the Road. She has also twice received the Christopher Award, as well as the Schneider Family Book Award and the Golden Kite Award. Joan Bauer lives in Brooklyn, New York.
Loading...
or
Not Currently Available for Direct Purchase