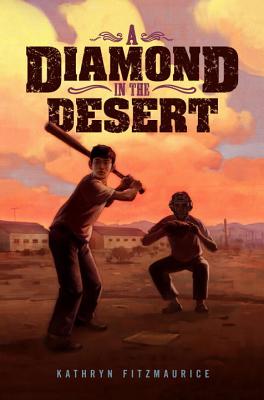 A Diamond in the Desert

“Life in the Japanese internment camp at Gila River wasn't exactly easy or comfortable, but his love of baseball allows 12-year-old Tetsu to forget, however briefly, how much he misses his home, his dog, and his father. Fitzmaurice weaves a great story told from Tetsu's point of view and with all of the attention span of a young boy -- some topics continue for pages, while other observations are brief and to the point. Based on interviews and true events, this story is a good introduction to the topic of Japanese internment during WWII, and demonstrates that baseball is truly an American pastime.”
— Rachel Dunham, Once Upon a Time, Montrose, CA
View the List

For Tetsu, baseball is so much more than just a game

On December 6, 1941, Tetsu is a twelve-year-old California boy who loves baseball. On December 7, 1941, everything changes. The bombing of Pearl Harbor means Tetsu's Japanese-American family will be relocated to an internment camp.

Gila River camp isn't technically a prison, but with nowhere to go, nothing to do, and no time frame for leaving, it might as well be. So when someone has the idea of building a baseball diamond and starting a team, Tetsu is overjoyed. But then his sister gets dangerously sick, forcing him to choose between his family and his love of the game. This is an impeccably researched, lyrical story about baseball, honor, and a turbulent period in U.S. history.

Praise For A Diamond in the Desert…

Praise for A Diamond in the Desert by Kathryn Fitzmaurice:

"A solid, affecting choice for multicultural and WWII studies, with resources for student research appended." —Booklist

"This book provides a striking glimpse at internment camp life and would fit well with the study of World War II or human rights." —Library Media Connection

Kathryn Fitzmaurice (www.kathrynfitzmaurice.com) is also the author of The Year the Swallows Came Early. She lives with her husband, two sons, and her dog, Holly, in Monarch Beach, California.
Loading...
or
Not Currently Available for Direct Purchase