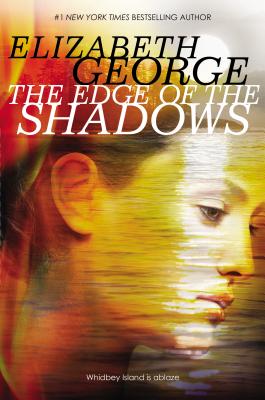 The first fire may have been an accident, but what about the second? And the third—the one that killed someone. Becca King and her friends wonder if one of the newcomers to the island is to blame. Perhaps it’s Isis Martin’s brother, Aidan, just home from a school for troubled teens. Or Parker Natalia, a talented musician fired by his bandmates for unknown reasons.

Meanwhile, Becca’s education in the paranormal continues, as fellow psychic Diana Kinsale encourages her to explore her growing extrasensory abilities.

Beautiful Whidbey Island may seem like a tranquil haven, but all is not as it seems.

The third book in the Whidbey Island saga confirms Elizabeth George’s place as a top-notch writer of suspense novels.

Praise for The Edge of the Shadows:

“On Whidbey Island, everyone has got a secret, and those secrets intertwine in fascinating and intricate ways. . . those who are already hooked on George’s clear expository style and elegant construction will find much to enjoy.” —Booklist

"Readers eager to revisit the residents of Whidbey Island will find much to love here. . . Enjoyable." —School Library Journal

“One need not have read the first book to be engrossed. . . a riveting story. . . readers will be eager for the next installment.” —VOYA

“Readers will remember Whidbey for decades to come. George has scored an ‘A+’ again. . . waiting for book number three is going to take an incredible amount of patience. Bravo!” —Suspense Magazine

"In her first foray into YA fiction, Ms George (a beloved adult suspense novelist) has hit the nail on the proverbial head with this action-packed, mysterious, and somewhat 'creepy' novel . . . the writing is superb from Ms. George, as always but . . . it's the combination of great characters and relationships that truly have this novel raising the bar when it comes to today's YA fiction." —Suspense Magazine

The first book in the Whidbey Island saga, The Edge of Nowhere, was a finalist for both the Edgar and Agatha Awards. The second book, The Edge of the Water, and the third, The Edge of the Shadows, continue the story in the island setting, which is notable for its beauty and mystery.

Visit Elizabeth George at www.elizabethgeorgeonline.com.
Loading...
or
Not Currently Available for Direct Purchase