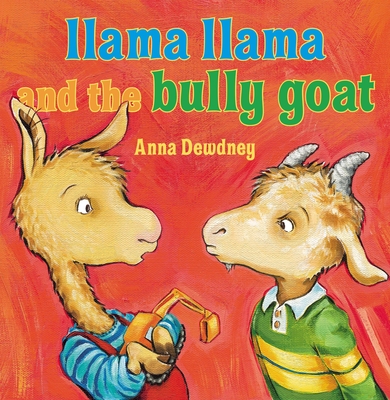 Gilroy laughs at everything.

Llama sings out just the same.

Teacher has some things to say:

calling names is not OK.

Llama Llama is learning lots of new things at school and making many friends. But when Gilroy Goat starts teasing him and some of their classmates, Llama Llama isn't sure what to do. And then he remembers what his teacher told him—walk away and tell someone. It works! But then Llama Llama feels badly. Can he and Gilroy try to be friends again?

Taking on a difficult but important part of children's lives, Anna Dewdney gives readers a way to experience and discuss bullying in a safe and comforting way.

Anna Dewdney was a teacher, mother, and enthusiastic proponent of reading aloud to children. She continually honed her skills as an artist and writer and published her first Llama Llama book in 2005. Her passion for creating extended to home and garden and she lovingly restored an 18th century farmhouse in southern Vermont. She wrote, painted, gardened, and lived there with her partner, Reed, her two daughters, two wirehaired pointing griffons, and one bulldog. Anna passed away in 2016, but her spirit will live on in her books.

Praise For Llama Llama and the Bully Goat…

Praise for LLAMA LLAMA AND THE BULLY GOAT by Anna Dewdney:

"Dewdney’s lovable Llama Llama offers children one strategy to combat bullying, all couched in her trademark rhyming verse and presented through situations that are sure to resonate with those new-to-school." —Kirkus