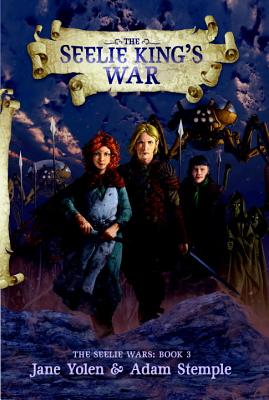 The exciting conclusion to the Seelie Wars trilogy. Full of magic, battles, and page-turning excitement, this series is a perfect introduction to classic fantasy.

The war that Prince Aspen and midwife's apprentice Snail started—purely by accident—is at hand. The Unseelie Army, the evil side of Faerie, will soon invade and destroy the Seelie kingdom. Aspen is terrified, not simply because his homeland is on the verge of ruin, but because he is now, after the death of his father and brothers, the Seelie King.

He is a young, untried king; a king without a battle plan. But he has Snail, his first and only friend, and the only one who can raise the army Aspen needs—an army of changelings, like her. First, however, she has to convince the mysterious, dangerous Professor Odds, the changelings’ leader, who has a destructive plan of his own.

Jane Yolen (www.janeyolen.com) has won countless awards for her wide-ranging body of work. She lives in Western Massachusetts and Scotland. Her son Adam Stemple (www.adamstemple.com) is the author of two novels for adults. He lives in Minneapolis, Minnesota. Jane Yolen and Adam Stemple have collaborated on two “rock ‘n’ troll fairy tales” (Pay the Piper and Troll Bridge), B.U.G., and The Hostage Prince. Visit the website for the Seelie Wars at www.theseeliewars.com.

Praise For The Seelie King's War (The Seelie Wars #3)…

“An entertaining, thrilling fantasy with a host of endearing characters.” —Publishers Weekly

"A rather thoughtful look at conflict, loyalty, and courage, and the discussion sparked here will hopefully continue with the proposed sequels." —BCCB
or
Not Currently Available for Direct Purchase
Copyright © 2020 American Booksellers Association