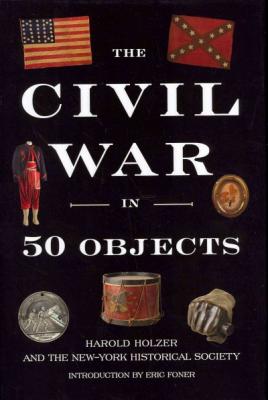 The Civil War in 50 Objects

The American companion to "A History of the World in 100 Objects" A fresh, visual perspective on the Civil War
From a soldier's diary with the pencil still attached to John Brown's pike, the Emancipation Proclamation, a Confederate Palmetto flag, and the leaves from Abraham Lincoln's bier, here is a unique and surprisingly intimate look at the Civil War.
Lincoln scholar Harold Holzer sheds new light on the war by examining fifty objects from the New-York Historical Society's acclaimed collection. A daguerreotype of an elderly, dignified ex-slave, whose unblinking stare still mesmerizes; a soldier's footlocker still packed with its contents; Grant's handwritten terms of surrender at Appomattox the stories these objects tell are rich, poignant, sometimes painful, and always fascinating. They illuminate the conflict from all perspectives Union and Confederate, military and civilian, black and white, male and female and give readers a deeply human sense of the war.
With an introduction from Pulitzer Prize winner Eric Foner and more than eighty photographs, "The Civil War in 50 Objects" is the perfect companion for readers and history fans to commemorate the 150th anniversaries of both the Battle of Gettysburg and Lincoln's Gettysburg Address.

Harold Holzer has written or edited more than forty books on Lincoln and the Civil War era. He is currently a senior vice president at The Metropolitan Museum of Art and a Roger Hertog Fellow at the New-York Historical Society. He lives in New York City.

The New-York Historical Society is the oldest museum in New York City, and one of the country s pre-eminent cultural institutions."
Loading...
or
Not Currently Available for Direct Purchase