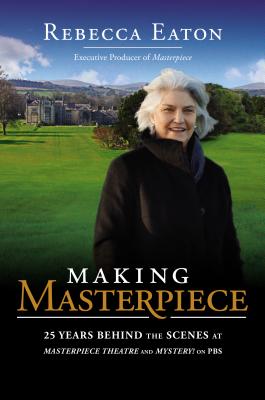 The Emmy Award-winning producer of PBS's "Masterpiece Theatre "and "Mystery " reveals the secrets to "Downton Abbey," "Sherlock," and its other hit programs
For more than twenty-five years and counting, Rebecca Eaton has presided over PBS's "Masterpiece Theatre," the longest running weekly prime time drama series in American history. From the runaway hits
"Upstairs, Downstairs" and "The Buccaneers," to the hugely popular "Inspector Morse," "Prime Suspect," and "Poirot," "Masterpiece Theatre" and its sibling series "Mystery "have been required viewing for fans of quality drama.
Eaton interviews many of the writers, directors, producers, and other contributors and shares personal anecdotes including photos taken with her own camera about her decades-spanning career. She reveals what went on behind the scenes during such triumphs as "Cranford" and the multiple, highly-rated programs made from Jane Austen's novels, as well as her aggressive campaign to attract younger viewers via social media and online streaming. Along the way she shares stories about actors and other luminaries such as Alistair Cooke, Maggie Smith, Diana Rigg, Benedict Cumberbatch and Daniel Radcliffe, whose first TV role was as the title character in "David Copperfield."
Readers will also get to know Eaton on a personal level. With a childhood steeped in theater, an affinity for nineteenth century novels and culture, and an accidental apprenticeship with the BBC, Eaton was practically born to lead the "Masterpiece "and "Mystery " franchises. "Making Masterpiece" marks the first time the driving force behind the enduring flagship show reveals all.

Rebecca Eaton regards her decades-long stewardship of "Masterpiece" as the ideal job for the daughter of an English professor and an actress. She has been the executive producer of the show for twenty-eight of its forty-two years on the air. Awards on her watch include forty-three prime-time Emmy awards, fifteen Peabody awards, two Golden Globes, and two Academy Award nominations.

At "Masterpiece Theatre" and "Mystery!" she extended the programs' reach with contemporary dramas; initiated co-productions with the BBC ("Middlemarch, The Buccaneers"); co-produced feature films such as Jane Austen's "Persuasion" and "Mrs. Brown" starring Dame Judi Dench; and oversaw the rebranding of the series in 2008. Queen Elizabeth II awarded her an honorary OBE (Officer, Order of the British Empire) in 2003.

She lives in Cambridge, Massachusetts, and spends time at the family house in Kennebunkport, Maine.
Loading...
or
Not Currently Available for Direct Purchase