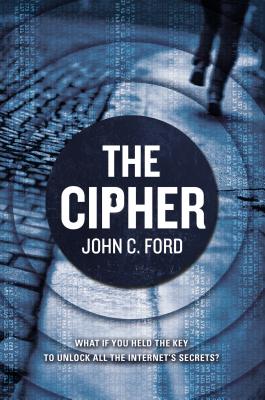 "Ford's The Cipher is a thrill-a-minute ride. A very cool read."--David Baldacci

You think your emails are private?
Your credit card number is secure?
That stock trades, government secrets, and nuclear codes are safe?
...th1nk aga1n.

Robert “Smiles” Smylie is not a genius. He feels like he’s surrounded by them, though, from his software mogul dad to his brainy girlfriend to his oddball neighbor Ben, a math prodigy.  When Ben cracks an ancient, real-life riddle central to modern data encryption systems, he suddenly holds the power to unlock every electronic secret in the world—and Smiles finally has a chance to prove his own worth.

Smiles hatches a plan to protect Ben from the government agents who will stop at nothing to get their hands on his discovery.  But as he races from a Connecticut casino to the streets of Boston, enlisting the help of an alluring girl, Smiles comes to realize the most explosive secrets don’t lie between the covers of Ben’s notebook—they’re buried in his own past.

Eerily close to reality and full of shocking twists, this techno-thriller reveals how easily the private can become public, and just how dangerous it can be to encrypt our personal histories.

Praise For The Cipher…

PRAISE FOR THE CIPHER:

"The Cipher is an exciting tale with a twist ending that teens will enjoy." —School Library Journal

"Ford (The Morgue and Me) weaves a twisty, paranoid tale of technology, secrets, and lies" —Publishers Weekly

PRAISE FOR JOHN'S FIRST BOOK, THE MORGUE AND ME:“Fast-paced and full of red herrings, it’ll keep you guessing.” —The New York Post“A chance to get in on the ground floor of what appears to be a promising career in crime fiction.” —The Los Angeles Times “A terrific debut. Christopher Newell is the most realistically and comically awkward teenager ever to solve a crime.” —The Detroit News“A dark and stellar debut . . . . Ford spins a tale that’s complex but not confusing, never whitewashing some of the harsher crimes people commit. The result is a story that holds its own as a mainstream mystery as well as a teen novel.” —Publishers Weekly, starred review  “Ford’s unpredictable curveballs and switcheroos never relent. A satisfyingly grim departure from the usual squeaky-clean teen sleuthing.” —Booklist

John C. Ford (johncfordbooks.com and @fordjohnc) is the author of The Morgue and Me, a YA take on the classic detective novel that was nominated for an Edgar Award and short-listed for five different state teen book awards.  A former litigator who practiced in the nation's capital, he eventually returned to his love of writing fiction, and to his hometown outside Detroit, Michigan.
Loading...
or
Not Currently Available for Direct Purchase