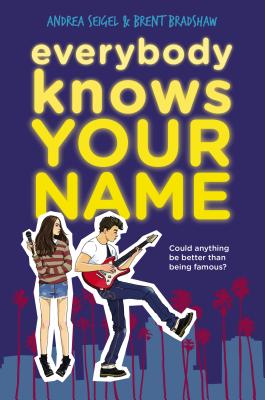 Everybody Knows Your Name

A romantic comedy with an unforgettable cast of characters (and way more laughs than any episode of American Idol), perfect for fans of Pitch Perfect. Meet Magnolia.
Her father's dead, her boyfriend's ditched her to commit himself more fully to surfing, and her mother's depressed because she can't get cast on The Real Housewives of Orange County. All Magnolia wants is to reinvent herself. Meet Ford.
Half his family is in jail, the other half probably should be, he shoplifted his way into a job at a record store, and his brother pawned his 1953 Telecaster for a quick buck. All Ford wants is to reinvent himself. Ford, meet Magnolia.
When the two teens are cast in Spotlight, a reality TV singing competition, both see it as their chance to start anew. With each episode, as they live together in a Hollywood Hills mansion and sing their hearts out, Ford and Magnolia fall in love. But how genuine can that love be when a television audience is watching their every move--and when their pasts are catching up them so much faster than they can run?

Andrea Seigel is the author of Like the Red Panda, To Feel Stuff, and The Kid Table. She is the screenwriter for the feature film Laggies, directed by Lynn Shelton and starring Keira Knightley, Chloe Grace Moretz, and Sam Rockwell. Learn more at andreaseigel.com, or follow her @AndreaSeigel Brent Bradshaw is a television writer and actor. He has written for the Emmy Awards, the MTV Movie Awards, the People's Choice Awards, and others. He has also appeared on HBO's "Enlightened" as well as late night shows like "Lopez Tonight" and "Last Call With Carson Daly." Seigel and Bradshaw live in South Pasadena, California, with their daughter, Winona, and their French Bulldog, Christmas.
Loading...
or
Not Currently Available for Direct Purchase