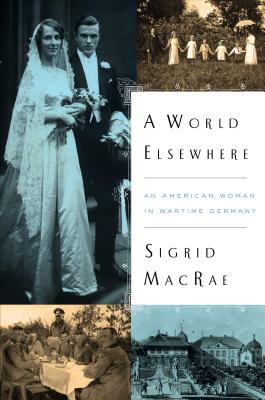 An American Woman in Wartime Germany

The extraordinary love story of an American blueblood and a German aristocrat and a riveting tale of survival in wartime Germany
Sigrid MacRae never knew her father, until a trove of letters revealed not only him, but also the singular story of her parents intercontinental love affair. While visiting Paris
in 1927, her American mother, Aimee, raised in a wealthy Connecticut family, falls in love with a charming, sophisticated Baltic German baron, a penniless exile of the Russian revolution. They marry. But the harsh reality of post World War I Germany is inescapable: a bleak economy and the rise of Hitler quash Heinrich's diplomatic
ambitions, and their struggling family farm north of Berlin drains Aimee's modest fortune. In 1941, Heinrich volunteers for the Russian front and is killed by a sniper. Widowed, living in a country soon at war with her own, Aimee must fend for herself. With home and family in jeopardy, she and her six young children flee the advancing
Russian army in an epic journey, back to the country she thought she d left behind.
A World Elsewhere is a stirring narrative of two hostages to history and a mother's courageous fight to save her family.

Sigrid MacRae is the coauthor of Alliance of Enemies, about the undercover collaboration between the American OSS and the German Resistance to end WWII. She holds a graduate degree in Art History from Columbia. She lives in New York City.
Loading...
or
Not Currently Available for Direct Purchase