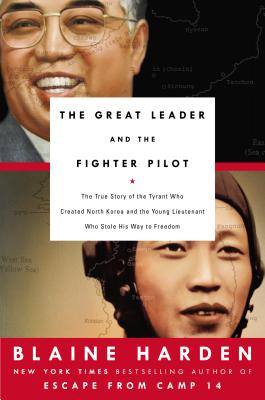 The Great Leader and the Fighter Pilot

From the New York Times bestselling author of Escape From Camp 14, Blaine Harden tells the riveting story of Kim Il Sung's rise to power, and the brave North Korean fighter pilot who escaped the prison state and delivered the first MiG-15 into American hands
In The Great Leader and the Fighter Pilot, New York Times bestselling author Blaine Harden tells the riveting story of how Kim Il Sung grabbed power and plunged his country into war against the United States while the youngest fighter pilot in his air force was playing a high-risk game of deception and escape.
As Kim ascended from Soviet puppet to godlike ruler, No Kum Sok noisily pretended to love his Great Leader. That is, until he swiped a Soviet MiG-15 and delivered it to the Americans, not knowing they were offering a $100,000 bounty for the warplane (the equivalent of nearly one milliondollars today). The theft just weeks after the Korean War ended in July 1953 electrified the world and incited Kim's bloody vengeance.
During the Korean War the United States brutally carpet bombed the North, killing hundreds of thousands of civilians and giving the Kim dynasty, as Harden reveals, the fact-based narrative it would use to this day to sell paranoia and hatred of Americans.
Drawing on documents from Chinese and Russian archives about the role of Mao and Stalin in Kim's shadowy rise, as well as from never-before-released U.S. intelligence and interrogation files, Harden gives us a heart-pounding escape adventure and an entirely new way to understand the world's longest-lasting totalitarian state.

Blaine Harden formerly served as The Washington Post s bureau chief in Nairobi, Warsaw, New York, Seattle, and Tokyo. He covered civil wars in sub-Saharan Africa, the collapse of Communism in Eastern Europe, and the breakup of Yugoslavia. He was also a local and national reporter for The New York Times, as well as a writer for The New York Times Magazine. He is the author of three other books: Africa: Dispatches from a Fragile Continent, A River Lost: The Life and Death of the Columbia, and Escape from Camp 14. Africa won a Pen American Center citation for first book of nonfiction. Escape from Camp 14 was a New York Times and international bestseller published in twenty-eight languages. He lives in Seattle."
Loading...
or
Not Currently Available for Direct Purchase