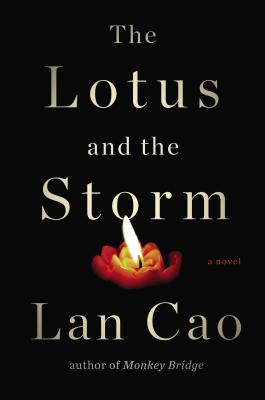 The Lotus and the Storm

An epic tale of love, loyalty, and war from the acclaimed author of "Monkey Bridge"
Half a century after it began, the Vietnam War still has a hold on our national psyche. Lan Cao's now-classic debut, "Monkey Bridge," won her wide renown for connecting . . . the opposite realities of Vietnam and America (Isabel Allende). In her triumphant new novel, Cao transports readers back to the war, illuminating events central to twentieth-century history through the lives of one Vietnamese American family.
Minh is a former South Vietnamese commander of the airborne brigade who left his homeland with his daughter, Mai. During the war, their lives became entwined with those of two Americans: James, a soldier, and Cliff, a military adviser. Forty years later, Minh and his daughter Mai live in a close-knit Vietnamese immigrant community in suburban Virginia. As Mai discovers a series of devastating truths about what really happened to her family during those years, Minh reflects upon his life and the story of love and betrayal that has remained locked in his heart since the fall of Saigon.


Praise For The Lotus and the Storm…

Praise for The Lotus and the Storm

“The Lotus and the Storm is part beautiful family saga, part coming-of-age story, part love story, but above all a searing indictment of the American campaign in Vietnam and its incalculable toll on generations past and future. A powerful read from start to end.”
—Khaled Hosseini, author of The Kite Runner

“A profoundly moving novel about the shattering effects of war on a young girl, her family, and her country. Lan Cao brings Saigon’s past vividly to life through the eyes of Mai, following the girl and her father halfway around the world to a suburb in Virginia, where forty years later, Mai’s trauma unravels. In this fractured world where old wars, loves, and losses live on, The Lotus and the Storm is a passionate testament to the truth that the past is the present—inseparable, inescapable, enduring.”
—Ruth Ozeki, author of A Tale for the Time Being

“A heartwrenching and heartwarming epic about war and love, hurt and healing, losing and rediscovering homelands. Lan Cao dramatizes landmark battles in the Vietnam War and the toll such battles take on winners and losers. The Lotus and the Storm establishes Lan Cao as a world-class writer.”
—Bharati Mukherjee, author of Jasmine

“Lan Cao is not only one of the finest of the American writers who sprang from and profoundly understand the war in Vietnam and the Vietnamese diaspora, but also one of our finest American writers, period. The Lotus and the Storm is a brilliant novel that illuminates the human condition shared by us all.”
—Robert Olen Butler, Pulitzer Prize–winning author of A Good Scent from a Strange Mountain

“An impressive debut . . . Cao has joined writers like Salman Rushdie and Bharati Mukherjee in mapping the state of exile and its elusive geography of loss and hope.”
—Michiko Kakutani, The New York Times

“With incredible lightness, balance, and elegance, Lan Cao crosses over an abyss of pain, loss, separation and exile, connecting on one level the opposite realities of Vietnam and North America, and on a deeper level the realities of the material world and the world of the spirits.”
—Isabel Allende

Lan Cao is a novelist and a renowned expert in international law, trade, and economic development. A professor of law at the Dale E. Fowler School of Law at Chapman University in Orange, CA. She lives in southern California.
Loading...
or
Not Currently Available for Direct Purchase