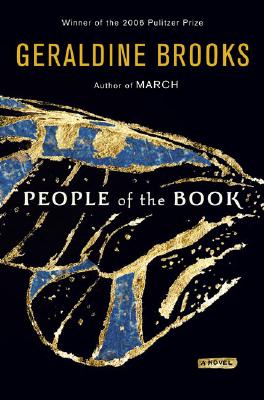 People of the Book

View our feature on Geraldine Books's "People of the Book."From the Pulitzer Prize winning author of "March," the journey of a rare illuminated manuscript through centuries of exile and war
In 1996, Hanna Heath, an Australian rare-book expert, is offered the job of a lifetime: analysis and conservation of the famed Sarajevo Haggadah, which has been rescued from Serb shelling during the Bosnian war. Priceless and beautiful, the book is one of the earliest Jewish volumes ever to be illuminated with images. When Hanna, a caustic loner with a passion for her work, discovers a series of tiny artifacts in its ancient binding an insect wing fragment, wine stains, salt crystals, a white hair she begins to unlock the book's mysteries. The reader is ushered into an exquisitely detailed and atmospheric past, tracing the book's journey from its salvation back to its creation.
In Bosnia during World War II, a Muslim risks his life to protect it from the Nazis. In the hedonistic salons of fin-de-siecle Vienna, the book becomes a pawn in the struggle against the city's rising anti-Semitism. In inquisition-era Venice, a Catholic priest saves it from burning. In Barcelona in 1492, the scribe who wrote the text sees his family destroyed by the agonies of enforced exile. And in Seville in 1480, the reason for the Haggadah's extraordinary illuminations is finally disclosed. Hanna's investigation unexpectedly plunges her into the intrigues of fine art forgers and ultra-nationalist fanatics. Her experiences will test her belief in herself and the man she has come to love.
Inspired by a true story, "People of the Book" is at once a novel of sweeping historical grandeur and intimate emotional intensity, an ambitious, electrifying work by an acclaimed and beloved author.

Geraldine Brooksis the author of four novels, the Pulitzer Prize winning"March"and the international bestsellers"Caleb s Crossing," "People of the Book," and"Year of Wonders." She has also written the acclaimed nonfiction works"Nine Parts of Desire"and"Foreign Correspondence."Her most recent novel, "Caleb s Crossing," was the winner of the New England Book Award for Fiction and the"Christianity Today"Book Award, and was a finalist for the Langum Prize in American Historical Fiction. Born and raised in Australia, she lives on Martha s Vineyard with her husband, the author Tony Horwitz."
Loading...
or
Not Currently Available for Direct Purchase