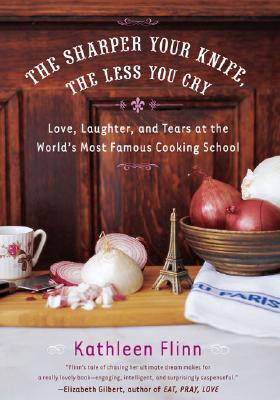 The Sharper Your Knife, the Less You Cry (Hardcover)

Love, Laughter, and Tears at the World's Most Famous Cooking School

A delightful true story of food, Paris, and the fulfillment of a lifelong dream

In 2003, Kathleen Flinn, a thirty-six-year-old American living and working in London, returned from vacation to find that her corporate job had been eliminated. Ignoring her mother's advice that she get another job immediately or "never get hired anywhere ever again," Flinn instead cleared out her savings and moved to Paris to pursue a dream--a diploma from the famed Le Cordon Bleu cooking school. The Sharper Your Knife, the Less You Cry is the touching and remarkably funny account of Flinn's transformation as she moves through the school's intense program and falls deeply in love along the way. Flinn interweaves more than two dozen recipes with a unique look inside Le Cordon Bleu amid battles with demanding chefs, competitive classmates, and her "wretchedly inadequate" French. Flinn offers a vibrant portrait of Paris, one in which the sights and sounds of the city's street markets and purveyors come alive in rich detail. The ultimate wish fulfillment book, her story is a true testament to pursuing a dream. Fans of Julie & Julia, Almost French, and Eat, Pray, Love will be amused, inspired, and richly rewarded by this seductive tale of romance, Paris, and French food.

Kathleen Flinn has been a writer and journalist for nearly twenty years. Her work has appeared in the "Chicago Tribune," "Chicago Sun-Times," "USA Weekend," "Men's Fitness" and many other publications. She is a proud member of the International Association of Culinary Professionals, the American Society of Journalists and Authors, and the Author's Guild. She divides her time between Seattle and southwest Florida.
or
Not Currently Available for Direct Purchase
Copyright © 2020 American Booksellers Association