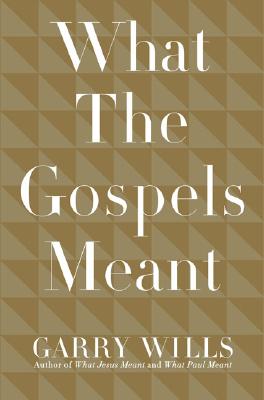 What the Gospels Meant

Garry Wills's recent New York Times bestselling books What Jesus Meant and What Paul Meant were tour-de-force interpretations on Jesus and the Apostle Paul. Now Wills turns his remarkable gift for biblical analysis to the four gospels of Matthew, Mark, Luke, and John. Wills examines the goals, methods, and styles of the evangelists and how these shaped the gospels' messages. Hailed as "one of the most intellectually interesting and doctrinally heterodox Christians writing today"(The New York Times Book Review), Wills guides readers through the maze of meanings within these foundational texts, revealing their essential Christian truths.

Garry Wills is one of the most respected writers on religion today. He is the author of Saint Augustine's Childhood, Saint Augustine's Memory, and Saint Augustine's Sin, the first three volumes in this series, as well as the Penguin Lives biography Saint Augustine. His other books include "Negro President" Jefferson and the Slave Power, Why I Am a Catholic, Papal Sin, and Lincoln at Gettysburg, which won the Pulitzer Prize.
Loading...
or
Not Currently Available for Direct Purchase