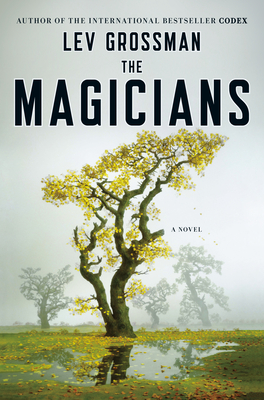 Praise For The Magicians: A Novel (Magicians Trilogy)…

"This is a book for grown-up fans of children's fantasy and would appeal to those who loved Donna Tartt's The Secret History. Highly recommended."
-Library Journal (Starred Review)

"Very dark and very scary, with no simple answers provided-fantasy for grown- ups, in other words, and very satisfying indeed."
-Kirkus Reviews

"The Magicians is to Harry Potter as a shot of Irish whiskey is to a glass of weak tea."
-George R.R. Martin, bestselling author of A Game of Thrones

"The Magicians ought to be required reading for anyone who has ever fallen in love with a fantasy series, or wished they went to a school for wizards."
-Kelly Link, author of Magic for Beginners and Stranger Things Happen

"The Magicians is a spellbinding, fast-moving, dark fantasy book for grownups that feels like an instant classic."
-Kate Christensen, PEN/Faulkner award winning author of The Great Man and The Epicure's Lament

"Remember the last time you ran home to finish a book? This is it, folks. The Magicians is the most dazzling, erudite and thoughtful fantasy novel to date."
-Gary Shteyngart, author of Absurdistan and The Russian Debutante's Handbook

"The Magicians brilliantly explores the hidden underbelly of fantasy and easy magic ... It's like seeing the worlds of Narnia and Harry Potter through a 3-D magnifying glass."
-Naomi Novik, author of His Majesty's Dragon

"Grossman clearly has read his POtter and much more. While this story invariably echoes a whole body of romantic coming-of-age tales, Grossman's American variation is fresh and compelling. Like a jazz musician, he riffs on Potter and Narnia, but makes it his own."
--Washington Post

"Grossman skillfully moves us through four years of school and a postgraduate adventure, never letting the pace slacken...beguiling."
--Seattle Times

"An irresistible storytelling momentum makes The Magicians a great summer book, both thoughtful and enchanting."
--Salon

"Sly and lyrical, [The Magicians] captures the magic of childhood and the sobering years beyond."
--Entertainment Weekly

"...no doubt that this book is inventive storytelling and Grossman is at the height of his powers."
--Chicago Sun-Times

"The Magicians reimagines modern-day fantasy for grownups. [It] breathes life into a cast of characters you want to know...and does what [some] claim books never really manage to do: 'get you out, really out, of where you were and into somewhere better."
--Louisville Courier-Journal

Lev Grossman is the book critic for Time magazine and the author of five novels, including the international bestseller Codex and the #1 New York Times bestselling Magicians trilogy. He lives in Brooklyn with his wife and three children.