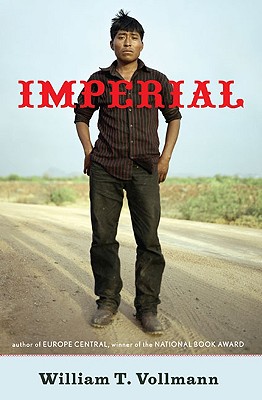 An epic study of an emblematic American region by one of our most celebrated writers
It sprawls across a stinking artificial sea, across the deserts, date groves, and labor camps of southeastern California, right across the Mexican border. For generations of migrant workers, from Okies fleeing the Dust Bowl of the 1930s to Mexican laborers today, Imperial County has held the promise of paradise-and the reality of hell. It is a land beautiful and harsh, enticing and deadly, rich in history and heartbreak. Across the border, the desert is the same but there are different secrets. In "Imperial," award-winning writer William T. Vollmann takes us deep into the heart of this haunted region, and by extension into the dark soul of American imperialism.
Known for his penetrating meditations on poverty and violence, Vollmann has spent ten years doggedly investigating every facet of this bi-national locus, raiding archives, exploring polluted rivers, guarded factories, and Chinese tunnels, talking with everyone from farmers to border patrolmen in his search for the fading American dream and its Mexican equivalent. The result is a majestic book that addresses current debates on immigration, agribusiness, and corporate exploitation, issues that will define America's identity in the twenty-first century.

William T. Vollmann is the author of eight novels, three collections of stories, a memoir, and Rising Up and Rising Down, which was a finalist for the National Book Critics Circle Award in nonfiction. Vollman's writing has been published in The New Yorker, Harper's, The Paris Review, Esquire, Conjunctions, Granta, and many other magazines. He lives in California.
Loading...
or
Not Currently Available for Direct Purchase