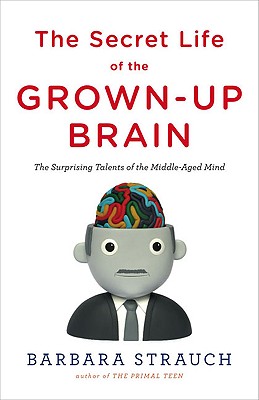 The Secret Life of the Grown-up Brain (Hardcover)

The Surprising Talents of the Middle-Aged Mind

A leading science writer examines how the brain's capacity reaches its peak in middle age
For many years, scientists thought that the human brain simply decayed over time and its dying cells led to memory slips, fuzzy logic, negative thinking, and even depression. But new research from neuroscientists and psychologists suggests that, in fact, the brain reorganizes, improves in important functions, and even helps us adopt a more optimistic outlook in middle age. Growth of white matter and brain connectors allow us to recognize patterns faster, make better judgments, and find unique solutions to problems. Scientists call these traits cognitive expertise and they reach their highest levels in middle age.
In her impeccably researched book, science writer Barbara Strauch explores the latest findings that demonstrate, through the use of technology such as brain scans, that the middle-aged brain is more flexible and more capable than previously thought. For the first time, long-term studies show that our view of middle age has been misleading and incomplete. By detailing exactly the normal, healthy brain functions over time, Strauch also explains how its optimal processes can be maintained. Part scientific survey, part how-to guide, "The Secret Life of the Grown-Up Brain" is a fascinating glimpse at our surprisingly talented middle-aged minds.


Praise For The Secret Life of the Grown-up Brain: The Surprising Talents of the Middle-Aged Mind…

Praise for The Primal Teen by Barbara Strauch

"Upends the longstanding belief that the teenage brain is largely complete, concluding instead that it is undergoing dramatic changes that can help explain what appears to be a gap between intelligence and judgement."
-The Hartford Courant

"This is such a smart book...Barbara Strauch acts as a world-class guide to a mysterious place, taking us on a journey through the teenage brain and making sense of the scenery. In turns funny, curious, explanatory, vivid, she does an absolutely compelling job of helping us to understand our children-and ourselves."
-Deborah Blum, author of Love at GoonPark: Hanny Harlow and the Science of Affection

"Through interviews with parents, physicians, neuroscientists, and teens, Strauch has compiled impressive insights about the nature of being a teen or the parent of one."
-Science News

"An intriguing look at cutting-edge studies that now tell us the brain is not finished growing in a child's early years but continues into the teens."
-The Plain Dealer

"Can knowing more about the teenager's brain help us to understand the teenager's behavior? Can an account of the neuroscience of adolescence be lively and readable? Barbara Strauch provides convincing evidence that the answer to both questions is yes."
-Judith Rich Harris, author of The Nurture Assumption: Why Children Turn Out the Way They Do

"Readers will be struck by the wonderfully candid comments by those interviewed as well as Strauch's insightful narrative."
-Publishers Weekly

"Strauch's well-researched book explains studies that were impossible, without such advanced technology as the MRI in clear, compassionate, layperson's language...A parents' must-read."
-Booklist

"Strauch [has]...a light, anecdotal style and a sense of humor. This is a very useful book...[These] are conclusions parents will want to consider carefull."
-The Washington Post Book World

"Strauch tackles [loaded questions] with all the scientific instruments at her disposal...the latest findings neurological, biochemical, and psychological, with an illuminating dose of anecdote thrown in."
-The New Scientist