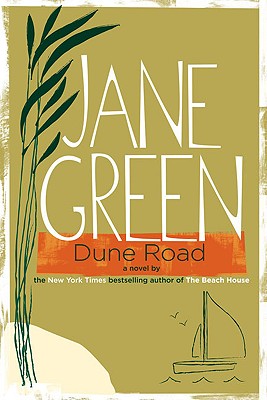 The instant "New York Times" bestseller from one of the most beloved voices in women's fiction
An ever-growing legion of fans greets the publication of each new tale from the inimitable Jane Green. Her latest gem, "Dune Road," is set in tony Highfield, Connecticut, where recent divorcee Kit Hargrove has joyfully exchanged the requisite diamond studs and Persian rugs of a Wall Street Widow for a clapboard Cape with sea-green shutters and sprawling impatiens. Her kids are content, her ex cooperative, and each morning she wakes up to her dream job: assisting the blockbuster novelist Robert McClore. Then an unexpected series of events forces Kit to realize that her blissfully constructed idyll and blossoming new romance aren't as perfect as she thought. A warm, witty, and gloriously observed meditation on the challenges of starting over, "Dune Road" is Jane Green at her absolute best.

Jane Green was born and brought up in London. After abandoning a Fine Art degree and a stint in journalism, she went into public relations and worked for a time on This Morning. Jane then went back into the newspaper world and became a popular feature writer with the Daily Express, before going freelance and starting her first novel. A string of international bestsellers and marriage to an American later, Jane now lives in Connecticut but flies home to London as often as four children and lots of animals allow.Jane's hugely successful books include; Straight Talking, Jemima J., Mr Maybe, Bookends, Babyville, Spellbound, The Other Woman and Life Swap. Her latest novel is Second Chance. "
Loading...
or
Not Currently Available for Direct Purchase