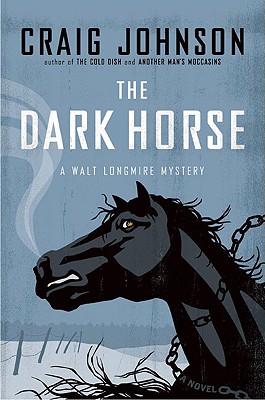 “Mary Barsad is accused of having shot her husband six times as partial retribution for his setting fire to their barn and killing her horses. But Sheriff Walt Longmire is not convinced she did it, and he sets off to see if he's right. Craig Johnson's latest is another winner in this compelling western mystery series.”
— Sue Tank, Paulina Springs Books, Sisters, OR
View the List

Interweaving classic noir sensibilities and humor with contemporary themes of social justice, Craig Johnson's popular Walt Longmire mysteries transport readers to the sparse and rugged landscape of Wyoming. In The Dark Horse, the sheriff investigates when his instincts tell him something isn't right about a prisoner accused of killing her husband.

Wade Barsad, a man with a dubious past, locked his wife's horses in their barn and burned the animals alive. In return, Mary shot Wade in the head six times-or so the story goes. Walt doesn't believe Mary's confession, and he's determined to dig deeper. Posing as an insurance claims investigator, Walt soon discovers other people who might have wanted Wade dead, including a beautiful Guatemalan bartender and a rancher with a taste for liquor, but not for honesty.

The Dark Horse is sure to build on the success of Another Man's Moccasins as Sheriff Longmire unpins his star and ventures into a town without pity to save a woman without hope.

Craig Johnson has a background in law enforcement and education. He lives in Ucross, Wyoming, population 25.
Loading...
or
Not Currently Available for Direct Purchase