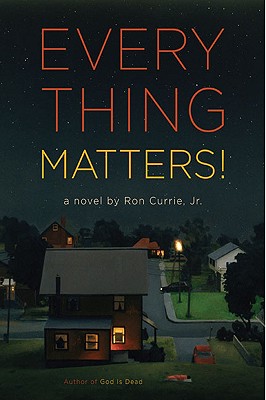 “What would you do if you knew the hour and the day that earth was to be destroyed by a meteor? This is the struggle of Junior Thibodeaux. As he races against time to save everything he loves, the reader will be transfixed and, ultimately, transformed by this big-hearted, brilliant novel.”
— christopher bowe, Longfellow Books, Portland, ME
View the List

In infancy, Junior Thibodeaux is encoded with a prophesy: a comet will obliterate life on Earth in thirty-six years. Alone in this knowledge, he comes of age in rural Maine grappling with the question: Does anything I do matter? While the voice that has accompanied him since conception appraises his choices, Junior's loved ones emerge with parallel stories-his anxious mother; his brother, a cocaine addict turned pro-baseball phenomenon; his exalted father, whose own mortality summons Junior's best and worst instincts; and Amy, the love of Junior's life and a North Star to his journey through romance and heartbreak, drug-addled despair, and superheroic feats that could save humanity. While our recognizable world is transformed into a bizarre nation at endgame, where government agents conspire in subterranean bunkers, preparing citizens for emigration from a doomed planet, Junior's final triumph confounds all expectation, building to an astonishing and deeply moving resolution. Ron Currie, Jr., gets to the heart of character, and the voices who narrate this uniquely American tour de force leave an indelible, exhilarating impression.


Praise For Everything Matters!…

"Mr. Currie is a startlingly talented writer whose book will pay no heed to ordinary narrative conventions.... He survives the inevitable, apt comparisons to Kurt Vonnegut and writes in a tenderly mordant voice of his own.... Throughout the story there is the sheer delight of Mr. Currie's fresh, joltingly funny imagery.... Above all "Everything Matters!" radiates writerly confidence. The excitement that drives the reader from page to page is not about the characters. It's about seeing what Mr. Currie will try next."
--Janet Maslin, New York Times

Ron Currie Jr. is a native of Waterville, Maine, and whose fiction has appeared in "Glimmer Train," "The Sun," "Other Voices" and "Night Train." His stories have won prizes in The World's Best Short Story competition and have been shortlisted for the Fish International Short Story award and "Swink" magazine's Emerging Writer Award. "God is Dead" is his first novel.
Loading...
or
Not Currently Available for Direct Purchase