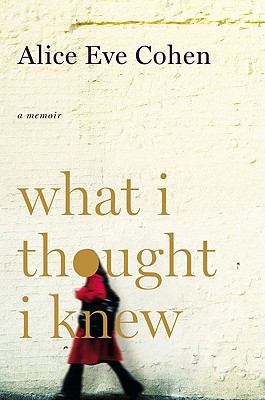 What I Thought I Knew

“Alice Eve Cohen is 44 years old and sick. Months of tests and doctor's exams have left her with a portfolio of diagnoses. However, an emergency CAT scan reveals the real situation: Alice is six months pregnant. Her story is horrifying -- a litany of medical malpractice and callous behavior that will send a chill up your spine. You won't forget her story.”
— Jackie Blem, Tattered Cover Bookstore, Denver, CO
View the List

At age forty-four, Alice Eve Cohen was happy for the first time in years. After a difficult divorce, she was engaged to an inspiring man, joyfully raising her adopted daughter, and her career was blossoming. Alice tells her fiancé that she's never been happier. And then the stomach pains begin.

In her unflinchingly honest and ruefully witty voice, Alice nimbly carries us through her metamorphosis from a woman who has come to terms with infertility to one who struggles to love a heartbeat found in her womb - six months into a high-risk pregnancy.

What I Thought I Knew is a page-turner filled with vivid characters, humor, and many surprises and twists of fate. With the suspense of a thriller and the intimacy of a diary, Cohen describes her unexpected journey through doubt, a broken medical system, and the hotly contested terrain of motherhood and family in today's society. Timely and compelling, What I Thought I Knew will capture readers of memoirs such as Eat, Pray, Love; The Glass Castle; and A Three Dog Life.

Alice Eve Cohen is a playwright, solo theater artist, and memoirist. She has written for Nickelodeon and PBS and received fellowships and grants from the New York State Council on the Arts and the National Endowment for the Arts. She teaches at The New School in New York City.