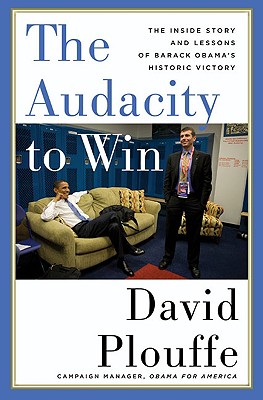 The Audacity to Win

The Inside Story and Lessons of Barack Obama's Historic Victory


David Plouffe not only led the effort that put Barack Obama in the White House, but he also changed the face of politics forever and reenergized the idea of democracy itself. The Audacity to Win is his story of that groundbreaking achievement, taking readers inside the remarkable campaign that led to the election of the first African American president.

For two years Plouffe worked side by side with Obama, charting the course of the campaign. His is the ultimate insider’s tale, revealing both the strategies that delivered Obama to office and how the candidate and campaign handled moments of great challenge and opportunity. Moving from the deliberations about whether to run at all, through the epic primary battle with Hillary Clinton and the general election against John McCain, Plouffe showcases the high-wire gamesmanship that fascinated pundits and the drama and intrigue that captivated a nation.

The Audacity to Win chronicles the arrival of a new moment in American life at the convergence of digital technology and grassroots organization, and the exciting possibilities revealed by a campaign that in many ways functioned as a $1 billion start-up with laser-like focus and discipline. In this extraordinary book, David Plouffe unfolds one of the most important political stories of our time, one whose lessons are not limited to politics, but reach to the greatest heights of what we dream about for our country and ourselves.


Praise For The Audacity to Win: The Inside Story and Lessons of Barack Obama's Historic Victory…

"...a gripping blockbuster of a book, manna for political aficianados and newcomers to elections alike, full of scrappy details, minute explanations of strategy, tales from the trail and candid assessments of mistakes made and lessons learned."
-Daily Kos

"After reading Plouffe's engaging, detailed and frequently illuminating account of the Obama presidential campaign, one can see how the campaign was lucky and good-- indeed, often very, very good."
-San Francisco Chronicle

"[Plouffe] gives readers a visceral sense of the campaign from an insider's point of view...He offers acute assessments of the larger dynamics at play in the 2008 race, and he is frank about missteps that the Obama campaign made along the way...A detailed and revealing account."
-Michiko Kakutani, The New York Times

"Plouffe has written the most important political book of the year. It reads like a thriller...I flipped it open, read a few lines and was hooked...But it's not the insider look at the past that makes the book so important. It's what it shows us about the present--and the effect it could have on the future."
-Arianna Huffington, The Huffington Post

David Plouffe served as the campaign manager for Barack Obama's primary and general election victories in 2008. He was the architect of the strategy for both elections. Prior to running the Obama campaign, Plouffe served as a leading Democratic Party media consultant from 2001 to 2007, playing a key role in the election of U.S. senators, governors, mayors, and House members across the country. He lives in Washington, D.C.