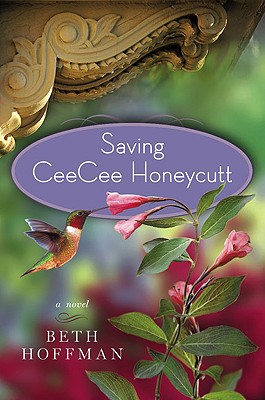 “Saving CeeCee Honeycutt is a story quilted with the patterns of vibrant characters whose lives become intricately connected to the emotional healing of 12-year- old CeeCee. Beth Hoffman's first novel is a tribute to the strength of women who have survived tragedy and loss to become beacons for others who suffer from emotional scars. I couldn't put it down, and book group members will be richer for having read CeeCee's story.”
— Nancy Baker, The Blue Marble, Fort Thomas, KY
View the List

Read Beth Hoffman's blogs and other content on the Penguin Community.

Twelve-year-old CeeCee Honeycutt is in trouble. For years, she has been the caretaker of her psychotic mother, Camille-the tiara-toting, lipstick-smeared laughingstock of an entire town-a woman trapped in her long-ago moment of glory as the 1951 Vidalia Onion Queen. But when Camille is hit by a truck and killed, CeeCee is left to fend for herself. To the rescue comes her previously unknown great-aunt, Tootie Caldwell.

In her vintage Packard convertible, Tootie whisks CeeCee away to Savannah's perfumed world of prosperity and Southern eccentricity, a world that seems to be run entirely by women. From the exotic Miz Thelma Rae Goodpepper, who bathes in her backyard bathtub and uses garden slugs as her secret weapons, to Tootie's all-knowing housekeeper, Oletta Jones, to Violene Hobbs, who entertains a local police officer in her canary-yellow peignoir, the women of Gaston Street keep CeeCee entertained and enthralled for an entire summer.

Laugh-out-loud funny and deeply touching, Beth Hoffman's sparkling debut is, as Kristin Hannah says, "packed full of Southern charm, strong women, wacky humor, and good old-fashioned heart." It is a novel that explores the indomitable strengths of female friendship and gives us the story of a young girl who loses one mother and finds many others.

"In Hoffman's charming debut, Cecelia Rose (CeeCee) Honeycutt tells the story of her tragic life and the strong women who stepped in to save her. At age 12, CeeCee realizes her mother, flouncing around Willoughby, OH, in prom dresses and matching shoes, is crazy and the town's laughingstock. Her father is never home, and nothing is going to change so CeeCee buries herself in books as an escape. But her true liberation comes after her mother's tragic death when great-aunt Tootie sweeps CeeCee off to Savannah. There, a group of powerful, independent women offer the young girl love, laughter and a new chance at life. Readers who enjoy strong female characters will appreciate CeeCee, a survivor despite her heartbreaking childhood, and Aunt Tootie and her friends, all of them steel magnolias. VERDICT Exemplifying Southern storytelling at its best, this coming-of-age novel is sure to be a hit with the book clubs that adopted Sue Monk Kidd's The Secret Life of Bees. Interestingly enough, both novels share the same editor."
-Library Journal

"'Welcome to my world, baby girl' (to paraphrase Fannie Flagg's title) is what came to my mind on meeting the narrator of Beth Hoffman's delightful debut, Saving CeeCee Honeycutt. Twelve-year-old CeeCee is a survivor. Alone too much, and with too much responsibility because of her psychotic mother, CeeCee is old beyond her years. When her mother dies, her mostly absent father sends her south from Ohio to Savannah under the care of her never-before-seen Great Aunt Tootie. The reader is introduced to a wide assortment of Southern women, each of whom plays a role in CeeCee's healing and coming to terms with her life. Each character also helps paint a detailed picture of the dichotomy between the 'old South' with its decaying gentry, and the changing South, where black and white are more than servant/mistress and white gloves are being exchanged for jeans and flip-flops. This lovely novel has earned the status of 'LizPick' even before it's published."
-Publishers Weekly, "Galley Talk" by Liz Murphy, the Learned Owl Book Show, Hudson, Ohio

Beth Hoffman was the president and owner of a major design studio in Cincinnati, Ohio. She sold her business to pursue writing full time. Beth lives in northern Kentucky with her husband and two very smart cats, in a beautiful historic home that she completely renovated. "
Loading...
or
Not Currently Available for Direct Purchase