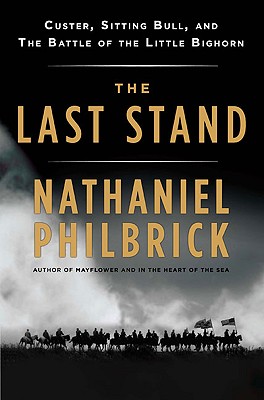 Custer, Sitting Bull, and the Battle of the Little Bighorn

Little Bighorn and Custer are names synonymous in the American imagination with unmatched bravery and spectacular defeat. Mythologized as Custer's Last Stand, the June 1876 battle has been equated with other famous last stands, from the Spartans' defeat at Thermopylae to Davy Crockett at the Alamo.

In his tightly structured narrative, Nathaniel Philbrick brilliantly sketches the two larger-than-life antagonists: Sitting Bull, whose charisma and political savvy earned him the position of leader of the Plains Indians, and George Armstrong Custer, one of the Union's greatest cavalry officers and a man with a reputation for fearless and often reckless courage. Philbrick reminds readers that the Battle of the Little Bighorn was also, even in victory, the last stand for the Sioux and Cheyenne Indian nations. Increasingly outraged by the government's Indian policies, the Plains tribes allied themselves and held their ground in southern Montana. Within a few years of Little Bighorn, however, all the major tribal leaders would be confined to Indian reservations.

Throughout, Philbrick beautifully evokes the history and geography of the Great Plains with his characteristic grace and sense of drama. "The Last Stand" is a mesmerizing account of the archetypal story of the American West, one that continues to haunt our collective imagination.


Praise For The Last Stand: Custer, Sitting Bull, and the Battle of the Little Bighorn…

Praise for Mayflower, finalist for the Pulitzer Prize in History

"Vivid and remarkably fresh...Philbrick has recast the Pilgrims for our age of searching and turmoil."
—The New York Times Book Review

"A signal achievement. Philbrick enlightens and even astounds."
—Salon.com

Praise for Sea of Glory, winner of the Theodore and Franklin D. Roosevelt Naval History Prize

"Brilliantly told...has to be among the best nonfiction books of this or any other year."
—Los Angeles Time Book Review

"A breathtaking account of one of history's greatest adventures."
—Entertainment Weekly

Nathaniel Philbrick grew up in Pittsburgh, Pennsylvania, and earned a BA in English from Brown University and an MA in America Literature from Duke University, where he was a James B. Duke Fellow. He was Brown University s first Intercollegiate All-American sailor in 1978, the same year he won the Sunfish North Americans in Barrington, RI. After working as an editor at "Sailing World" magazine, he wrote and edited several books about sailing, including "The Passionate Sailor, Second Wind," and "Yaahting: A Parody."

In 1986, Philbrick moved to Nantucket with his wife Melissa and their two children. In 1994, he published his first book about the island s history, "Away Off Shore," followed by a study of the Nantucket s native legacy, "Abram s Eyes." He was the founding director of Nantucket s Egan Maritime Institute and is still a research fellow at the Nantucket Historical Association.

In 2000, Philbrick published the "New York Times" bestseller "In the Heart of the Sea, "which won the National Book Award for nonfiction. The book is the basis of the forthcoming Warner Bros. motion picture Heart of the Sea, directed by Ron Howard and starring Chris Hemsworth, Cillian Murphy, Brendan Gleeson, Benjamin Walker, Ben Wishaw, and Tom Holland, which is scheduled for release in March, 2015. The book also inspired a 2001 Dateline special on NBC as well as the 2010 two-hour PBS American Experience film Into the Deep by Ric Burns.

His next book was "Sea of Glory," published in 2003, which won the Theodore and Franklin D. Roosevelt Naval History Prize and the Albion-Monroe Award from the National Maritime Historical Society. The New York Times Bestseller "Mayflower "was a finalist for both the 2007 Pulitzer Prize in History and the "Los Angeles Times" Book Award, won the Massachusetts Book Award for nonfiction, and was named one the ten Best Books of 2006 by the "New York Times Book Review." "Mayflower" is currently in development as a limited series on FX.

In 2010, he published the "New York Times" bestseller "The Last Stand," which was named a "New York Times" Notable book, a 2010 Montana Book Award Honor Book, and a 2011 ALA Notable Book. Philbrick was an on-camera consultant to the two-hour PBS American Experience film Custer s Last Stand by Stephen Ives. The book is currently being adapted for a ten-hour, multi-part television series. The audio book for Philbrick s "Why Read Moby-Dick?" (2011) made the ALA's Listen List in 2012 and was a finalist for the New England Society Book Award.

Philbrick s latest "New York Times" bestseller, "Bunker Hill: A City, a Siege, a Revolution," was published in 2013 and was awarded both the 2013 New England Book Award for Non-Fiction and the 2014 New England Society Book Award. "Bunker Hill" won the 2014 book award from the Society of Colonial Wars, and has been optioned by Warner Bros. for feature film adaptation with Ben Affleck attached to direct.

Philbrick s writing has appeared in "Vanity Fair," the "New York Times Book Review," the "Wall Street Journal," the "Los Angeles Times," and the" Boston Globe." He has appeared on the Today Show, the Morning Show, Dateline, PBS s American Experience, C-SPAN, and NPR. He and his wife still live on Nantucket."
Loading...
or
Not Currently Available for Direct Purchase