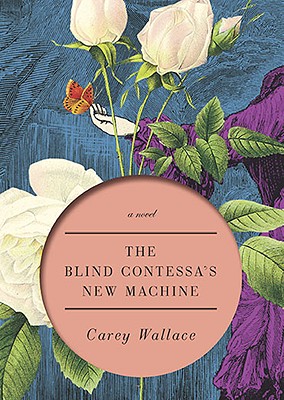 “This slim and enchanting debut novel tells of a love triangle between a young 19th-century Italian contessa, her strapping fiance, and the curiously inventive admirer who creates the world's first typewriter for her as she loses her sight. The fairy-tale-like story is charmingly told and strewn with beautiful images that will brighten your eyes even as the contessa's world dims around her.”
— Mark David Bradshaw, Watermark Books, Wichita, KS
View the List

An iridescent jewel of a novel that proves love is the mother of invention
In the early 1800s, a young Italian contessa, Carolina Fantoni, realizes she is going blind shortly before she marries the town's most sought-after bachelor. Her parents don't believe her, nor does her fiance. The only one who understands is the eccentric local inventor and her longtime companion, Turri. When her eyesight dims forever, Carolina can no longer see her beloved lake or the rich hues of her own dresses. But as darkness erases her world, she discovers one place she can still see-in her dreams. Carolina creates a vivid dreaming life, in which she can not only see, but also fly, exploring lands she had never known.
Desperate to communicate with Carolina, Turri invents a peculiar machine for her: the world's first typewriter. His gift ignites a passionate love affair that will change both of their lives forever.
Based on the true story of a nineteenth-century inventor and his innovative contraption, "The Blind Contessa's New Machine" is an enchanting confection of love and the triumph of the imagination.