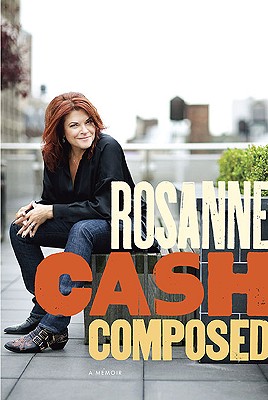 “Composed is a very personal account of Cash's musical career, her role as a mother, daughter and wife, and her battle with cancer and brain surgery. She eloquently foregrounds her musical career journey as she tenderly evokes the losses of those closest to her and reflects on the moments when she truly connected--as a daughter--to her iconic parents. Rosanne Cash is a theatrical triple threat: a lyrical singer; a choreographer of words; and a skilled thespian who relies on tears or wit at just the right moment.”
— Sarah Bagby, Watermark Books, Wichita, KS
View the List

A candid and moving memoir from the critically acclaimed singer and songwriter
For thirty years as a musician, Rosanne Cash has enjoyed both critical and commercial success, releasing a series of albums that are as notable for their lyrical intelligence as for their musical excellence.
Now, in her memoir, Cash writes compellingly about her upbringing in Southern California as the child of country legend Johnny Cash, and of her relationships with her mother and her famous stepmother, June Carter Cash. In her account of her development as an artist she shares memories of a hilarious stint as a twenty-year-old working for Columbia Records in London, recording her own first album on a German label, working her way to success, her marriage to Rodney Crowell, a union that made them Nashville's premier couple, her relationship with the country music establishment, taking a new direction in her music and leaving Nashville to move to New York. As well as motherhood, dealing with the deaths of her parents, in part through music, the process of songwriting, and the fulfillment she has found with her current husband and musical collaborator, John Leventhal.
Cash has written an unconventional and compelling memoir that, in the tradition of M. F. K. Fisher's "The Gastronomical Me" and Frank Conroy's "Stop-Time," is a series of linked pieces that combine to form a luminous and brilliant whole.


Praise For Composed: A Memoir…

"Beautifully written meditations on love, death, family and redemption from the celebrated songwriter…Intimate vignettes writ small fill this account, which illuminates her close, complicated relationships with both her mother and her father…Unflinchingly honest and incisive…Warmth and humor characterize the resilience of the author's spirit. An excellent memoir that ends on an encouraging note: 'More to come.' "
– Kirkus (Starred Review)

"This work is a rare treat…Cash's memoir sheds clear light on her talent and drive."
– Publishers Weekly (Starred Review)

"Cash's exquisite songwriting talent serves her well as an author…The musician's meditations on the powerful moments that shape a life…border on the poetic."
– Country Living Magazine

"Trust me, you're going to dig this: Composed is a wise and winning chronicle of the making of an artist."
– Colson Whitehead, author of Sag Harbor

"Rosanne Cash's memoir Composed is a classic folk song, full of real heartbreak after real heartbreak, deep love and desperate loss, and the courageous struggle to make sense of the human experience through the beauty and truth of Creative Art."
– Kris Kristofferson

"This is an extraordinarily and dauntingly honest book."
– Elvis Costello

"Book clubs everywhere, here's your next selection! Rosanne Cash has written a lush and glorious memoir that is wise and knowing, humorous and full of hope. The scenes from her life play through like a song, with operatic twists and quiet turns that inevitably lead her home. Composed is powerful and whole and completely unforgettable."
– Adriana Trigiani, bestselling author of the Big Stone Gap series

"An eloquent testimony to the power of song, love, and human resilience. Rosanne writes about life with insight, elegance, and an artist's open heart."
– Daniel J. Levitin, author of This Is Your Brain on Music

"Rosanne Cash is a gifted writer who has led an extraordinary life—but what stays with you from this beautiful book is how she makes the particular universal. She makes us feel the contradictory emotions of being someone's child, someone's lover, and someone's parent. She reminds us of the ecstasy of falling in love and the heartbreak of bad endings. She shares the hardest lessons—facing mortality in our loved ones and in ourselves—as eloquently as she makes us appreciate the thousand small joys in this passing world. Composed is more than the story of her life. It's the story of all our lives."
– Bill Flanagan, author of Evening's Empire

"Composed carries the perfect title. With her cool, crisp prose, Cash never makes a drama out of a crisis. This is no surprise to fans of her nonfiction writing and I envy anyone making the discovery. For lovers of music and literature alike."
– Wesley Stace, author of By George and Misfortune

ROSANNE CASH has recorded fourteen albums charting twenty-one Top 40 country singles, 11 of which made it to # 1, and two gold records. She has received ten Grammy nominations winning in 1985 and was nominated this year for Sea of Heartbreak, a duet with Bruce Springsteen on her current CD, "The List." Cash achieved the highest chart position of her career with the debut of "The List." The album, which "Vanity Fair" called superb, debuted in the Top 5 on the Country Chart, and entered The Billboard 200 at No. 22. Cash is the author of "Bodies of Water" and the children s book "Penelope Jane: A Fairy s Tale." Her essays and fiction have been published in "The New York Times, Rolling Stone," and "New York" magazine. She lives in New York City with her husband and children. "
Loading...
or
Not Currently Available for Direct Purchase