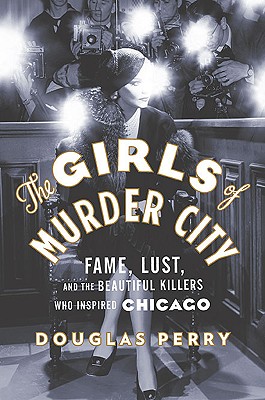 The Girls of Murder City

Fame, Lust, and the Beautiful Killers who Inspired Chicago

“Chicago during Prohibition in the year 1924 was a dangerous place to be an adulterer and a great place to be a killer. A lady killer. Just ask Belva Gaertner and Beulah Annan, two murderesses who became media sensations thanks to Maurine Watkins, a lowly 'girl reporter' for the Chicago Tribune. With detailed accounts of Jazz Age Chicago and 'Murderess Row' in Cook County Jail, Perry highlights a time when newspapers clamored over these killers, giving birth to the celebrity criminal and the power behind the manipulations of the mighty press.”
— Kristin Bates, McLean & Eakin Booksellers, Petoskey, MI
View the List

The true story of the murderesses who became media sensations and inspired the musical "Chicago"
Chicago, 1924.
There was nothing surprising about men turning up dead in the Second City. Life was cheaper than a quart of illicit gin in the gangland capital of the world. But two murders that spring were special - worthy of celebration. So believed Maurine Watkins, a wanna-be playwright and a "girl reporter" for the "Chicago Tribune, " the city's "hanging paper." Newspaperwomen were supposed to write about clubs, cooking and clothes, but the intrepid Miss Watkins, a minister's daughter from a small town, zeroed in on murderers instead. Looking for subjects to turn into a play, she would make "Stylish Belva" Gaertner and "Beautiful Beulah" Annan - both of whom had brazenly shot down their lovers - the talk of the town. Love-struck men sent flowers to the jail and newly emancipated women sent impassioned letters to the newspapers. Soon more than a dozen women preened and strutted on "Murderesses' Row" as they awaited trial, desperate for the same attention that was being lavished on Maurine Watkins's favorites.
In the tradition of Erik Larson's "The Devil in the White City" and Karen Abbott's "Sin in the Second City," Douglas Perry vividly captures Jazz Age Chicago and the sensationalized circus atmosphere that gave rise to the concept of the celebrity criminal. Fueled by rich period detail and enlivened by a cast of characters who seemed destined for the stage, "The Girls of Murder City" is crackling social history that simultaneously presents the freewheeling spirit of the age and its sober repercussions.


Praise For The Girls of Murder City: Fame, Lust, and the Beautiful Killers who Inspired Chicago…

"The recounting of the murders is gripping stuff, but where Perry shows a particularly gifted touch is in the sights and smells of a 1920s newsroom."
-The Portland Oregonian

"The Girls of Murder City spans several categories-true-crime, comedy, social history. It turns out that behind "Chicago" there was a sexy, swaggering, historical tale in no need of a soundtrack. Liked the movie. Loved the book."
-The Wall Street Journal

"Fans of true crime and popular history will enjoy the book's oversized female characters and its hardboiled background of crime and no punishment."
-The Boston Globe

"For true crime buffs, history fans or anyone interested in the roaring 1920s, this one's a sure-fire hit."
-Minneapolis Star Tribune

"Perry takes a sturdy foundation of murder, sex and Chicago's scandal-happy newspapers and builds a nonfiction marvel. His bouncy, exuberant prose perfectly complements the theatricality of the proceedings, and he deftly maneuvers away from the main story without ever losing momentum...The Girls of Murder City not only illustrates the origins of a new media monster, but reminds us that we've never been that innocent."
-BookPage

"A jazzy reprise of a time when the criminal justice system in Chicago let good- looking killers off the hook and newspapers exploited every lurid detail of dalliances turned fatal for their front pages."
-Shelf Awareness

"As entertaining as Chicago (on stage or screen), and far more informative, The Girls of Murder City recaptures a moment in which the Victorian feminine ideal was (and wasn't) giving way to the "churning change" of the flapper lifestyle - and ebulliently elucidates the emergence of the criminal as celebrity. It's this summer's "not guilty" pleasure."
-NPR, Books We Like

"Consistently entertaining...A chronicle of the wild spring and summer of 1924, when Chicago was afflicted with a seeming epidemic of female murderers."
-Kirkus Reviews

"[A] well-researched, fast-paced story behind the story."
-Booklist

DOUGLAS PERRY is an award-winning writer and editor whose work has appeared in the "Chicago Tribune, The San Jose Mercury News, Details," and "The Oregonian." He is the online features editor at "The Oregonian" and the co-author of "The Sixteenth Minute: Life in the Aftermath of Fame." He lives in Portland, Oregon.
Loading...
or
Not Currently Available for Direct Purchase