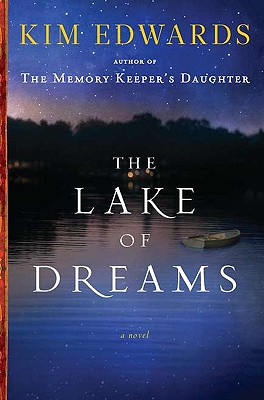 The Lake of Dreams

“When Lucy Jarrett returns to her childhood home in upstate New York to visit her mother, she is forced to confront the ghosts of her past. Lucy discovers that an ancestor was involved in the suffragette movement and was romantically connected with a well-known stained glass artist, even while Lucy herself reconnects with a former boyfriend who is now a local stained glass artist. In researching the past, Lucy must come to terms with her present, including confronting her long-withheld grief over her father's death under mysterious circumstances. This is a captivating novel from the best-selling author of The Memory Keeper's Daughter.”
— Karen Vail, Titcomb's Bookshop, East Sandwich, MA
View the List

From Kim Edwards, the author of the #1 "New York Times "bestseller "The Memory Keeper's Daughter," an arresting novel of one family's secret history
Imbued with all the lyricism, compassion, and suspense of her bestselling novel, "The Memory Keeper's Daughter," Kim Edwards's "The Lake of Dreams" is a powerful family drama and an unforgettable story of love lost and found.
Lucy Jarrett is at a crossroads in her life, still haunted by her father's unresolved death a decade earlier. She returns to her hometown in Upstate New York, The Lake of Dreams, and, late one night, she cracks the lock of a window seat and discovers a collection of objects. They appear to be idle curiosities, but soon Lucy realizes that she has stumbled across a dark secret from her family's past, one that will radically change her and the future of her family forever."
The Lake of Dreams "will delight those who loved "The Memory Keeper's Daughter," as well as fans of Anna Quindlen and Sue Miller.


Praise For The Lake of Dreams…

“Once again, Edwards has created a memorable cast of easily recognizable characters . . . This is a powerful story about the influence of history, the importance of our beliefs, and the willingness to embrace them all.”
—Booklist

“[Edwards’s] latest novel, set in the Finger Lakes region of her native New York, is another tour de force that showcases her talent for engaging readers immediately and, her agile prose would argue, effortlessly.”
—Louisville Courier-Journal

“Beautifully written, with vivid imagery and emotion, this book shines with artistry. Edwards has another winner here, and I look forward to reading more of her work.”
—Bookreporter.com

Kim Edwards is the author of the #1 "New York Times "bestseller "The Memory Keeper s Daughter," which was translated into thirty-eight languages." The Lake of Dreams "is her second "New York Times "bestselling novel. She is also the author of a collection of short stories, "The Secrets of a Fire King."" "Her honors include the Whiting Award, the British Book Award, and "USA" "Today" "s" Book of the Year, as well as the Nelson Algren Award, a National Magazine Award, and a grant from the National Endowment for the Arts. A graduate of the Iowa Writers Workshop, she has taught widely in the US and Asia, and currently lives in Lexington, Kentucky."