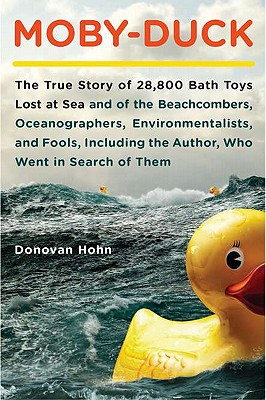 The True Story of 28,800 Bath Toys Lost at Sea and of the Beachcombers, Oceanographers, Environmentalists, and Fools,

Selected by "The New York Times Book Review" as a Notable Book of the Year A revelatory tale of science, adventure, and modern myth.
When the writer Donovan Hohn heard of the mysterious loss of thousands of bath toys at sea, he figured he would interview a few oceanographers, talk to a few beachcombers, and read up on Arctic science and geography. But questions can be like ocean currents: wade in too far, and they carry you away. Hohn's accidental odyssey pulls him into the secretive world of shipping conglomerates, the daring work of Arctic researchers, the lunatic risks of maverick sailors, and the shadowy world of Chinese toy factories.
"Moby-Duck" is a journey into the heart of the sea and an adventure through science, myth, the global economy, and some of the worst weather imaginable. With each new discovery, Hohn learns of another loose thread, and with each successive chase, he comes closer to understanding where his castaway quarry comes from and where it goes. In the grand tradition of Tony Horwitz and David Quammen, "Moby-Duck" is a compulsively readable narrative of whimsy and curiosity.

Donovan Hohn is a journalist whose work has appeared in "Harper's Magazine, The New York Times Magazine" and "Outside." He is currently the features editor at "GQ." "Moby-Duck" was nominated as the runner-up for for the 2011 PEN/ E. O. Wilson Literary Science Writing Award. Hohn lives in New York City.