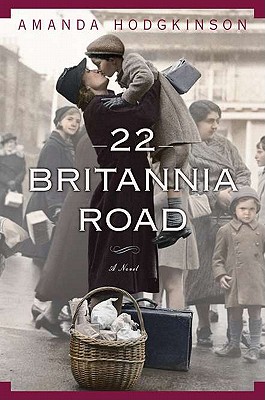 “'War-torn' describes so many things in Amanda Hodgkinson's novel - countries, people, and relationships. Janusz and Silvana are a young couple living in Warsaw when World War II begins and they are forced to part ways, he to join the army, and she to flee the city with their infant son. Janusz is soon separated from his unit and makes his way to England. When the couple and their son, now virtual strangers, are reunited in London at war's end, the long, and at times painful, process of rebuilding their broken lives begins. A stunning debut.”
— Jessie Martin, Nicola's Books, Ann Arbor, MI
View the List

A tour de force that echoes modern classics like "Suite Francaise" and "The Postmistress."
"Housekeeper or housewife?" the soldier asks Silvana as she and eight- year-old Aurek board the ship that will take them from Poland to England at the end of World War II. There her husband, Janusz, is already waiting for them at the little house at 22 Britannia Road. But the war has changed them all so utterly that they'll barely recognize one another when they are reunited. "Survivor," she answers.
Silvana and Aurek spent the war hiding in the forests of Poland. Wild, almost feral Aurek doesn't know how to tie his own shoes or sleep in a bed. Janusz is an Englishman now-determined to forget Poland, forget his own ghosts from the way, and begin a new life as a proper English family. But for Silvana, who cannot escape the painful memory of a shattering wartime act, forgetting is not a possibility.
One of the most searing debuts to come along in years, "22 Britannia Road." is the wrenching chronicle of how these damaged people try to become, once again, a true family. An unforgettable novel that cries out for discussion, it is a powerful story of primal maternal love, overcoming hardship, and, ultimately, acceptance-one that will pierce your heart.

Amanda Hodgkinson was born in Burnham-on-Sea, England, and lives with her husband and two daughters in a farmhouse in the southwest of France. This is her first novel.
or
Not Currently Available for Direct Purchase
Copyright © 2020 American Booksellers Association