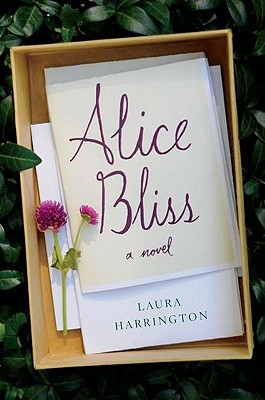 "Outside the back window Alice can see the outlines of the garden, some of the furrows visible under the snow, stretching away in long thin rows. She can't imagine doing the garden without her dad. It's his thing; she's always thought of herself as his assistant at best. She can't imagine doing anything without her dad and she starts to feel like she can't breathe. And then she looks at him. Just looks at him as he watches the fire with muffin crumbs on his lap.
'I'll write to you.'
'I know, sweetheart.'
'Every day.'"
--From "Alice Bliss"
When Alice Bliss learns that her father, Matt, is being deployed to Iraq, she's heartbroken. Alice idolizes her father, loves working beside him in their garden, accompanying him on the occasional roofing job, playing baseball. When he ships out, Alice is faced with finding a way to fill the emptiness he has left behind.
Matt will miss seeing his daughter blossom from a tomboy into a full-blown teenager. Alice will learn to drive, join the track team, go to her first dance, and fall in love, all while trying to be strong for her mother, Angie, and take care of her precocious little sister, Ellie. But the smell of Matt is starting to fade from his blue shirt that Alice wears everyday, and the phone calls are never long enough.
"Alice Bliss" is a profoundly moving coming-of-age novel about love and its many variations--the support of a small town looking after its own; love between an absent father and his daughter; the complicated love between an adolescent girl and her mother; and an exploration of new love with the boy-next-door. These characters' struggles amidst uncertain times echo our own, lending the novel an immediacy and poignancy that is both relevant and real. At once universal and very personal, "Alice Bliss" is a transforming story about those who are left at home during wartime, and a teenage girl bravely facing the future.

Laura Harrington is an award-winning playwright, lyricist, and librettist. She teaches playwriting at MIT and lives in Gloucester, Massachusetts.
Loading...
or
Not Currently Available for Direct Purchase