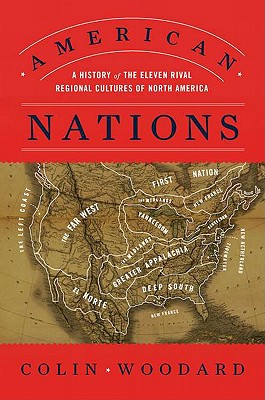 A History of the Eleven Rival Regional Cultures of North America

North America was settled by people with distinct religious, political, and ethnographic characteristics, creating regional cultures that have been at odds with one another ever since. Subsequent immigrants didn't confront or assimilate into an "American" or "Canadian" culture, but rather into one of the eleven distinct regional ones that spread over the continent each staking out mutually exclusive territory.

In "American Nations, " Colin Woodard leads us on a journey through the history of our fractured continent, and the rivalries and alliances between its component nations, which conform to neither state nor international boundaries. He illustrates and explains why "American" values vary sharply from one region to another. Woodard reveals how intranational differences have played a pivotal role at every point in the continent's history, from the American Revolution and the Civil War to the tumultuous sixties and the "blue county/red county" maps of recent presidential elections. "American Nations" is a revolutionary and revelatory take on America's myriad identities and how the conflicts between them have shaped our past and are molding our future.

Colin Woodard is a Maine native and the author of Ocean s End: Travels Through Endangered Seas. He is a regular contributor to the Christian Science Monitor and the San Francisco Chronicle."

Praise For American Nations: A History of the Eleven Rival Regional Cultures of North America…

“Mr. Woodard’s approach is breezier than Mr. Fischer’s and more historical than Mr. Garreau’s, but [Woodard] has earned a place on the shelf between them."

“One of the most original books I read in the last year was American Nations….During my five years as an Ambassador in the United States, I spent a lot of time studying the voting patterns of different states and reading American history, and I have to say I find Woodard’s thesis to be fully borne out by my own observations.”

“[American Nations] sets itself apart by delving deep into history to trace our current divides to enthno-cultural differences that emerged during the country’s earliest settlement.”

“In a compelling mash-up of the contemporary political geography of authors like Joel Garreau and Dante Chinni with the ethnography and history of David Hackett Finscher (Albion’s Seed), [Colin] Woodard divides North America into eleven distinct “nations”.

“Colin Woodard debunks the simplistic notion of Left Coast, red state, blues state and other broad-brush efforts to peg America’s differences….American Nations pulls off the unlikely feat of both offering the tools for just such a broader, deeper understanding—and demonstrates why, in a larger sense, that effort is doomed….The key to the [American Nations]’s effectiveness is Woodard’s skill—and irreverence—in delving into history with no qualms about being both brisk and contrarian….[I]n offering us a way to better understand the forces at play in the rumpus room of current American politics, Colin Woodard has scored a true triumph. I am going to order copies for my father and sister immediately—and I hope Woodard gets a wide hearing for his fascinating study.”

“In American Nations, [Colin Woodard] persuasively reshapes our understanding of how the American political entity came to be….[A] fascinating new take on history.”

“Well-researched analysis with appeal to both casual and scholarly readers.”

“Fascinating….Engrossing….In the end, though, [American Nations] is a smart read that feels particularly timely now, when so many would claim a mythically unified “Founding Fathers” as their political ancestors.”

“[Colin] Woodard persuasively argues that since the founding of the United States, 11 distinct geographical “nations” have formed within the Union, each with its own identity and set of values.”

"[Colin] Woodard’s account of American history is a refreshing take, and one I’d recommend to those curious of what causes our cultural differences.”

“If you want to better understand U.S. politics, history, and culture American Nations is to be required reading….By revealing this continent of rivals, American Nations will revolutionize the way Americans think about their past, their country, and themselves and is sure to spark controversy.”