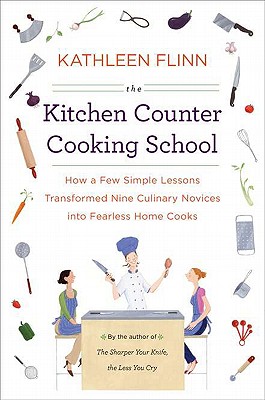 “Flinn's love of cooking led her to study at Le Cordon Bleu and her first book, The Sharper Your Knife, the Less You Cry. After helping a clueless cook shop for healthy food at the supermarket, Flinn realized that most Americans are lost when it comes to feeding themselves and their families. She began a project to transform the cooking and buying habits of nine volunteers through cooking lessons. This is a fascinating study of the reliance of Americans on pre-packaged food and the importance of cooking for health and nourishment.”
— Avery Dickey, Inkwood Books, Tampa, FL
View the List

The author of "The Sharper Your Knife" tells the inspiring story of how she helped nine others find their inner cook.

After graduating from Le Cordon Bleu in Paris, writer Kathleen Flinn returned with no idea what to do next, until one day at a supermarket she watched a woman loading her cart with ultraprocessed foods. Flinn's "chefternal" instinct kicked in: she persuaded the stranger to reload with fresh foods, offering her simple recipes for healthy, easy meals.

"The Kitchen Counter Cooking School" includes practical, healthy tips that boost readers' culinary self-confidence, and strategies to get the most from their grocery dollar, and simple recipes that get readers cooking.

Kathleen Flinn has been a writer and journalist for nearly twenty years. Her work has appeared in the "Chicago Tribune," "Chicago Sun-Times," "USA Weekend," "Men s Fitness" and many other publications. She is a proud member of the International Association of Culinary Professionals, the American Society of Journalists and Authors, and the Author s Guild. She divides her time between Seattle and southwest Florida."
Loading...
or
Not Currently Available for Direct Purchase