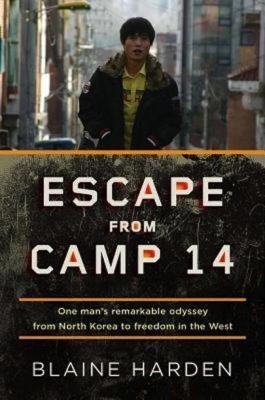 A New York Times bestseller, the shocking story of one of the few people born in a North Korean political prison to have escaped and survived. Blaine Harden's latest book, King of Spies, will be available from Viking in Fall 2017.

North Korea is isolated and hungry, bankrupt and belligerent. It is also armed with nuclear weapons. Between 150,000 and 200,000 people are being held in its political prison camps, which have existed twice as long as Stalin's Soviet gulags and twelve times as long as the Nazi concentration camps. Very few born and raised in these camps have escaped. But Shin Donghyuk did.

In Escape from Camp 14, acclaimed journalist Blaine Harden tells the story of Shin Dong-hyuk and through the lens of Shin's life unlocks the secrets of the world's most repressive totalitarian state. Shin knew nothing of civilized existence-he saw his mother as a competitor for food, guards raised him to be a snitch, and he witnessed the execution of his own family. Through Harden's harrowing narrative of Shin's life and remarkable escape, he offers an unequaled inside account of one of the world's darkest nations and a riveting tale of endurance, courage, and survival.


Praise For Escape from Camp 14: One Man's Remarkable Odyssey from North Korea to Freedom in the West…

"Harden’s book, besides being a gripping story, unsparingly told, carries a freight of intelligence about this black hole of a country."—Bill Keller, The New York Times

“The central character in Blaine Harden's extraordinary new book Escape from Camp 14 reveals more in 200 pages about human darkness in the ghastliest corner of the world's cruelest dictatorship than a thousand textbooks ever could...Escape from Camp 14, the story of Shin's awakening, escape and new beginning, is a riveting, remarkable book that should be required reading in every high-school or college-civics class. Like "The Diary of Anne Frank" or Dith Pran's account of his flight from Pol Pot's genocide in Cambodia, it's impossible to read this excruciatingly personal account of systemic monstrosities without fearing you might just swallow your own heart...Harden's wisdom as a writer shines on every page.”—The Seattle Times

“A book without parallel, Escape from Camp 14 is a riveting nightmare that bears witness to the worst inhumanity, an unbearable tragedy magnified by the fact that the horror continues at this very moment without an end in sight.”—Terry Hong, Christian Science Monitor

"If you have a soul, you will be changed forever by Blaine Harden's Escape from Camp 14...Harden masterfully allows us to know Shin, not as a giant but as a man, struggling to understand what was done to him and what he was forced to do to survive. By doing so, Escape from Camp 14 stands as a searing indictment of a depraved regime and a tribute to all those who cling to their humanity in the face of evil."---Mitchell Zuckoff, New York Times bestselling author of Lost in  Shangri-La

“A remarkable story, [Escape from Camp 14] is a searing account of one man’s incarceration and personal awakening in North Korea’s highest-security prison.”—The Wall Street Journal

“As U.S. policymakers wonder what changes may arise after the recent death of North Korean leader Kim Jong Il, this gripping book should raise awareness of the brutality that underscores this strange land. Without interrupting the narrative, Harden skillfully weaves in details of North Korea’s history, politics and society, providing context for Shin’s plight.”—Associated Press

“As an action story, the tale of Shin’s breakout and flight is pure The Great Escape, full of feats of desperate bravery and miraculous good luck. As a human story it is gut wrenching; if what he was made to endure, especially that he was forced to view his own family merely as competitors for food, was written in a movie script, you would think the writer was overreaching. But perhaps most important is the light the book shines on an under-discussed issue, an issue on which the West may one day be called into account for its inactivity.”—The Daily Beast

“A riveting new biography...If you want a singular perspective on what goes on inside the rogue regime, then you must read [this] story.  It’s a harrowing tale of endurance and courage, at times grim but ultimately life-affirming.”—CNN

“Harden expertly interleaves thoughtful reports on the larger North Korean context into the more personal part of the narrative. Precise and lucid, he fills us in on this totalitarian state's workings, its international relations and its devastating famines…This book packs a huge wallop in its short 200 pages. The author sticks to the facts and avoids an emotionally exploitative tone -- but those facts are more than enough to rend at our hearts, to make us want to seek out more information and to ask if there isn't more than can be done to bring about change.”—Damien Kilby, The Oregonian

"This is a story unlike any other... More so than any other book on North Korea, including my own, Escape from Camp 14 exposes the cruelty that is the underpinning of Kim Jong Il's regime. Blaine Harden, a veteran foreign correspondent from The Washington Post, tells this story masterfully...The integrity of this book shines through on every page."---Barbara Demick, author of Nothing to Envy: Ordinary Lives in North  Korea

“Harden tells a gripping story. Readers learn of Shin’s gradual discovery of the world at large, nonadversarial human relationships, literature, and hope—and the struggles ahead. A book that all adults should read.”—Library Journal (starred review)

"With a protagonist born into a life of backbreaking labor, cutthroat rivalries, and a nearly complete absence of human affection, Harden's book reads like a dystopian thriller. But this isn't fiction-it's the biography of Shin Dong-hyuk."—Publishers Weekly

“[A] chilling [and] remarkable story of deliverance from a hidden land.”—Kirkus Reviews

"Through the extraordinary arc of Shin's life, Harden illuminates the North Korea that exists beyond the headlines and creates a moving testament to one man's struggle to retrieve his own lost humanity."---Marcus Noland, co-author of Witness to Transformation: Refugee Insights into North Korea

“Blaine Harden of the Washington Post is an experienced reporter of other hellholes, such as the Congo, Serbia, and Ethiopia. These, he makes clear, are success stories compared to North Korea…Harden deserves a lot more than ; ‘wow’ for this terrifying, grim and, at the very end, slightly hopeful story of a damaged man still alive only by chance, whose life, even in freedom, has been dreadful.”—Literary Review

"Mr. Shin's story, at times painful to read, recounts his physical and psychological journey from a lifetime of imprisonment in a closed and unfeeling prison society to the joys and challenges of life in a free society where he can live like a human being."---Kongdan Oh, co-author of The Hidden People of North Korea: Everyday  Life in the Hermit Kingdom

“Many good books will be published this year. This one is absolutely unique…Shin Dong-Hyuk is the only person born in a North Korean political camp to escape and defect. He told his story at length to veteran foreign correspondent Blaine Harden, who wrote this extraordinary book…I don't say that there's an answer to the issues raised by this book. But there is a question. And the question is: "High school students in America debate why President Franklin D. Roosevelt didn't bomb the rail lines to Hitler's caps. Their children may ask, a generation from now, why the West stared at far clearer satellite images of Kim Jong Il's camps and did nothing." This is tough reading. Read it.”—Don Graham, CEO of The Washington Post

"An unforgettable adventure story, a coming-of-age memoir of the worst childhood imaginable."—Slate

Blaine Harden is a reporter for PBS's FRONTLINE and a contributor to the Economist, and has served as The Washington Post's bureau chief in East Asia, Eastern Europe, and Africa. He is the author of Africa: Dispatches from a Fragile Continent and A River Lost: The Life and Death of the Columbia. He lives in Seattle, Washington.
Loading...
or
Not Currently Available for Direct Purchase